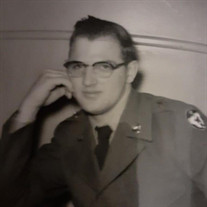 Gene Edward Stough, of York, went to the arms of his Lord and Savior at his daughter’s home on Sunday, November 7, 2021 at 1:30 AM at the age of 89. Gene was the husband of Martha Mae (Deckman) who entered into rest on December 23, 1991. He was the companion of Grace Stine, of York. Born in Windsor Township on April 28, 1932, Gene was the son of the late Harry and Mary (Fake) Stough. He was employed as a Night Watchman at House of Windsor for many years and eventually retired from ACCO Material Handling Solutions in York. He was a proud United States Army Veteran who served during the Korean War in Fairbanks, Alaska. He enjoyed watching TV, working on cars, loved dogs and cats of all types and especially adored his children and grandchildren. Gene was a member of Pleasant Grove United Methodist Church in Red Lion. Gene leaves behind his sons, Michael Stough, of York, James Stough and his companion, Rose, of Mechanicsburg, and John Stough of York, as well as his daughters, Marcia Bingham and husband, Brian, of Neoga, Il, and Stacy Hinkle, of York. He leaves his ten grandchildren, several great grandchildren as well as numerous nieces and nephews. He was preceded in death by his son, Edward G. Stough, who entered into rest in August 2015 and his siblings, Hilda Keener, Dallas Stough, Sr., and his daughter in law, Linda Stough, who entered into rest, shortly after Gene on November 9, 2021. A viewing for Gene will take place on Monday, November 15, 2021 from 9-10 AM at Burg Funeral Home, Inc., 134 W. Broadway, Red Lion. A Service of Honor and Praise for Gene will begin at 10 AM with Pastor Terry Robinson officiating. Burial will take place at Windsor Cemetery following the service with Full Military Rites offered by the York County Veterans Honor Guard. Those attending the service are asked to wear masks and observe social distancing. Contributions in memory of Gene may be offered to the Disabled American Veterans: PO Box 14301, Cincinnati, OH 45250, Alzheimer’s Association: 225 N. Michigan Ave., Fl. 17, Chicago, IL 60601 or the SPCA of York County: 3159 Susquehanna Trail North, York, PA 17406

The family of Gene Edward Stough created this Life Tributes page to make it easy to share your memories.

Gene Edward Stough, of York, went to the arms of his Lord and...

Send flowers to the Stough family.