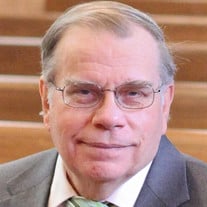 Dr. George Walter Lighty, Jr., of York, entered into rest after a brief illness on Monday, August 6, 2018 at the age of 72. He was the husband of the late Marie Elizabeth Folk-Lighty who entered into rest on July 31, 2016. Born on June 2, 1946 in York, PA to the late George Walter, Sr. and Mabel A. (Hilt) Lighty. George’s interest in Science led him into medicine, earning a B.S. (Biology) from the University of Pittsburgh, and MD and PhD (Physiology and Biophysics) from the Medical College of Pennsylvania, with internal medicine and cardiology residencies at the Mayo Clinic, Rochester, MN and University of Washington, Seattle, WA respectively. Dr. Lighty was a Diplomate of the American Board of Internal Medicine and a Fellow of the American College of Cardiology, and served on the faculty at the University of Washington, New York University School of Medicine, The State University of New York at Syracuse, The Philadelphia Heart Institute at Presbyterian Medical Center of the University of Pennsylvania, the Allegheny University of the Health Sciences and the MCP-Hahnemann School of Medicine. As a member of the American Heart Association, American Institute for Ultrasound in Medicine, and the American Society of Echocardiography, he was committed to furthering the science of medicine. He was a United States Army Veteran, retiring after over 20 years of service to our country with the rank of Lieutenant Colonel. Despite these accomplishments, he was proudest to have grown up and been a farmer. Other interests included woodworking, collecting model trains and gardening. He is survived by a son, Christopher George Folk Lighty (Jeanne) of Fairfax, VA, a daughter, Megan Elizabeth Folk Lighty of Willmar, MN, and a granddaughter Brynn Marie Lighty. Viewings for George will be on Friday, August 10th from 6-8 pm and on Saturday, Aug. 11th from 2-3 pm at Burg Funeral Home, Inc., 134 W. Broadway, Red Lion. A Service of Honor and Praise for George will begin at 3 pm at the funeral home with Pastor Sandra J. Kessinger, from Redeemer Lutheran Church in McLean, VA officiating. Burial will follow in Freysville Cemetery with full military rites offered by the York County Veterans Honor Guard. In lieu of flowers, memorial contributions may be offered to the American Heart Association, 610 Community Way, Lancaster, PA 17603 or to The Barnyard Sanctuary, PO Box 167, Blairstown, NJ 07825. www.BurgFuneralHome.com

Dr. George Walter Lighty, Jr., of York, entered into rest after a brief illness on Monday, August 6, 2018 at the age of 72. He was the husband of the late Marie Elizabeth Folk-Lighty who entered into rest on July 31, 2016. Born on June 2,... View Obituary & Service Information

The family of Dr. George W. Lighty Jr. created this Life Tributes page to make it easy to share your memories.

Send flowers to the Lighty family.