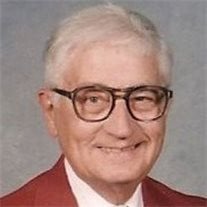 George "Bill" H. Sultner entered into eternal rest after a brief illness on Sat., Feb. 1, 2014 at 5:02 p.m. at Rest Haven York at the age of 93. He was the husband of Margaret "Peggy" E. (Woods) Sultner, to whom he married on Sept. 5, 1943. He was born in York on February 9, 1920, and was the son of the late Paul A. and Clara M. (Zimmerman) Sultner. Bill was a Metallurgist at GTE Sylvania where he worked for 35-plus years, retiring in 1985. He was a very active member of Chanceford Presbyterian Church for 20-plus years and an avid trumpet player. He started playing trumpet at his high school, York High, in its band and he also played at Christ Lutheran Church Sunday School and Orchestra. Then he had his own dance band called The Sultans of Swing Dance Band. Bill played in several local clubs and in Carlisle for about six years with his band. After he gave up his band, he began to travel and play in other bands. Surviving besides his wife, Margaret, of York, he leaves a daughter-in-law, Margaret A. (Baldwin) Sultner of York; several nieces and nephews; and a very Good Friend, Kenneth L. Snyder of Red Lion. He was preceded in death by his only son, G. Henry Sultner II who entered into rest on Oct. 18, 1998; and by two brothers and four sisters. Viewing will be held Tues., Feb. 11 from 10 to 11 a.m. at Burg Funeral Home, Inc., 134 W. Broadway, Red Lion. A Service of Honor and Praise for Bill will begin at 11 a.m. on Tues. at the funeral home. His pastor, Rev. Guy W. Dunham will officiate. Interment will be in Chanceford Presbyterian Cemetery in Airville In lieu of flowers, contributions may be offered to Chanceford Presbyterian Church, Rte. 425 and Kennedy Road, Airville, PA 17302. Bill was a "Good Guy" and a wonderful husband to Margaret for 70 years. He always put others' needs before his own, especially those of his family members. "In my heart, I will always hold a place that only you can fill. With Love, Peggy." www.BurgFuneralHome.com

The family of Georgle "Bill" H. Sultner created this Life Tributes page to make it easy to share your memories.