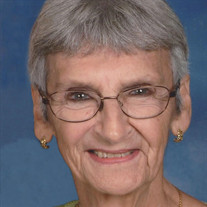 Geraldine V. (Rineholt) Seitz, 85, died peacefully, surrounded by her children, at her home on, January 27. Her courageous battle with ovarian cancer ended and she joined her late husband, Kenny, who died in 2016. Gerry was born in Red Lion on August 22, 1934, and was the daughter of the late Sally and Ralph Rineholt. She was a 1952 member of the Red Lion High School. She was the secretary at the Winterstown Elementary School for 32 years, retiring in 1993. She taught Sunday School for 25 years and was a faithful member of Winterstown United Methodist Church. She loved football, the Orioles, card games, camping and traveling. She was an avid bowler at one time and has the trophies and pins to prove it. She and Kenny bought motorcycles at age 52 and they enjoyed the freedom of the weekend rides with other couples. Gerry is survived by her four children, Geri Bull (Randy) of Naples, FL, Pam Rayburn of Red Lion, Kenyon Seitz (Lisa Hanson) of York, and Tammy Brooks of York. There are five grandchildren: Jason Stanley, Jessica Holmes, Stephanie Metz, Meredith Bull and Cara Brooks, and five great grandchildren: Caileb and Hunter Stanley, Elyssa and Connor Holmes, and Emersyn Metz. Gerry also leaves three sisters, Donalene Grove of Felton, Gladys Emick of Montoursville and Natalie Miller of Red Lion. A Service of Honor and Praise for Gerry will begin at 11 am, on Tuesday, February 4th, at Winterstown United Methodist Church, 12184 Winterstown Road, Felton, with her pastor, Rev. David K. Shultz, officiating. Viewings will be on Monday, Feb. 3rd, from 6-8 pm at Burg Funeral Home, Inc., 134 W. Broadway, Red Lion and Tuesday, from 10-11 am at church. Burial will be at Winterstown EV Cemetery. In lieu of flowers, contributions can be offered to Winterstown UM Church, 12184 Winterstown Road, Felton, PA 17322, or to Ascera Care Hospice, 984 Laucks Road, #1, York PA 17404. “I always wanted to make a difference in someone’s life” and Gerry certainly did that. She was an inspiration to all she met and was a wonderful mother, grandmother, sister and friend. She was a fighter and never compromised to live her best life. Gerry requested that those attending the service, to dress casually and in the bright colors that she loved.

Geraldine V. (Rineholt) Seitz, 85, died peacefully, surrounded by her children, at her home on, January 27. Her courageous battle with ovarian cancer ended and she joined her late husband, Kenny, who died in 2016. Gerry was born in Red Lion... View Obituary & Service Information

The family of Geraldine V. (Rineholt) Seitz created this Life Tributes page to make it easy to share your memories.

Send flowers to the Seitz family.