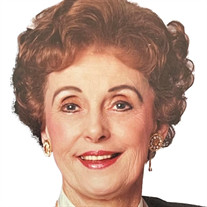 Geraldine T. (Taylor) Thompson of York died on Tuesday, December 29th, 2020 at St. Anne’s Retirement Community in Columbia, PA. She was 98 years old. As a Christian (having given her heart to Jesus at age 11), she was an active member of Zion UCC Church of York, including teaching Sunday School for over 25 years. Born in Yoe, she was the daughter of the late James C. Taylor and Leona (Kohler) Taylor. She graduated from Red Lion High School Class of 1940 and was the loving mother to three daughters, Nancy Ricciardi (Robert) of Malvern, and Susan Palmer (Christopher) of York and Jane Trevison who preceded her in death in 2000. She was blessed to have five grandsons, and two granddaughters, Matthew Ricciardi, Timothy Ricciardi, Michael Trevisan and Katherine Kennedy, Edward Palmer and Maxfield Palmer, and Jessica Ricciardi who also preceded her in death. She was the great grandmother of twelve great grandchildren, Nicholas, Peyton and Ryan Ricciardi, Nathan, Ashley and Eva Ricciardi, Grayson and Taylor Jane Trevisan, Madelyn, Samantha and Charlotte Kennedy and Naomi Palmer. All services will be private and at the convenience of the family. Burg Funeral Home, 134 W. Broadway, Red Lion will be assisting with the arrangements. She will be buried next to her husband Edward Thompson, at Red Lion Cemetery, who entered into rest on June 28, 1997. In lieu of flowers, memorial contributions may be made to one of the following ministries, who’s missions were close to Geraldine’s heart: •Home Department, Zion UCC Church, 100 Lafayette Street, York, PA 17401. •New Life for Girls, 5925 Lewisberry Road, Dover, PA 17315. •LifePath Christian Ministries, York, PA (Formerly York Rescue Mission), 363-373 W. Market Street, York, PA 17405. Online condolences may be offered at: www.BurgFuneralHome.com

Geraldine T. (Taylor) Thompson of York died on Tuesday, December 29th, 2020 at St. Anne&#8217;s Retirement Community in Columbia, PA. She was 98 years old. As a Christian (having given her heart to Jesus at age 11), she was an active member... View Obituary & Service Information

The family of Geraldine T. (Taylor) Thompson created this Life Tributes page to make it easy to share your memories.

Send flowers to the Thompson family.