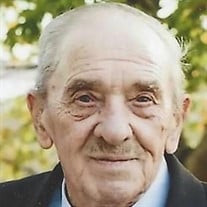 Glenn L. Bowles,78, of York, entered into God’s care on Monday, November 25, 2019, at 9:59 am at his residence, where he resided with his companion, Gloria Grove. He was born on June 30, 1941 and was the son of the late Charles C. and Rhoda E. (Taylor) Bowles. He worked as a farmer, butcher and a mason for the former Godfrey Brothers in Red Lion for many years, from where he retired. He was a member of the American Legion Post #605 of Dallastown. Glenn enjoyed gardening and going to the market to sell his produce. He enjoyed spending time with his family; especially his grandchildren and he will be remembered as being a very hard working man who passed his ethics and values of hard work on to his children and his grandchildren. Glenn leaves a son, LeRoy E. Bowles and his wife Linda of Red Lion and a daughter, Apryl L. Bowles of Windsor. He was the grandfather of Tyler Bowles and wife Tiffany of York, Cortney Leber and husband Lonnie of Seven Valleys, Kaitlyn Pettyjohn of Windsor, and great grandfather of Chase and Luke Bowles and Logan Leber. He has five siblings, Ethel Sexton of MD, Phyllis Ritz of York, Norma Botterbush of Dover, Dennis Bowels of Red Lion and Charles Herbert Bowles of Brogue, along with numerous nieces and nephews. A viewing for Glenn will be on Friday, Nov. 29th, from 10-11 am at Burg Funeral Home, Inc., 134 W. Broadway, Red Lion. A Service of Honor and Praise will begin at 11 am at the funeral home, with Pastor Howard Edmundson, of Family of God Community Church in Red Lion officiating. Burial will take place in Zion UM Cemetery in Red Lion. In lieu of flowers, contributions may be offered to Family of God Community Church, 147 1st Ave., Red Lion, PA 17356. www.BurgFuneralHome.com

The family of Glenn L. Bowles created this Life Tributes page to make it easy to share your memories.

Send flowers to the Bowles family.