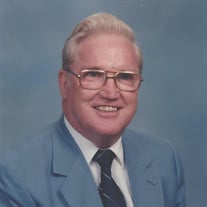 Rev. Golden A. Gaither, formerly of Red Lion, went from life to Life Eternal on Friday, September 7, 2018 at 12:30 pm at Rest-Haven York at the age of 90. He was the husband of Barbara H. (Hess) Gaither who resides in York. They were married on July 17, 1954, celebrating 64 years together. Pastor Gaither was born in Martinsburg, WV on October 25, 1927 and was the son of the late Albert G. and Dorothy M. (Tinsman) Gaither. He graduated from Martinsburg High School in Martinsburg, WV, Class of 1948. He then went to Shenandoah University followed by Lebanon Valley College and then to United Theological Seminary in Dayton, OH. He was a United States Army Veteran and it was during his time in the military that God called him to use his talents to spread his good word to others by way of the ministry. As a pastor, he served many churches, including Christ United Methodist in Yoe for fourteen years prior to his retirement. Then he served as the visitation pastor of Bethany United Methodist Church in Red Lion where he is a member. He enjoyed fishing, playing horseshoes, country music, yodeling, playing string instruments, gardening and cooking, which he taught to his children. Besides his wife, Barbara, he leaves a son, Gregory P. Gaither of York and two daughters, Rebecca L. Mentzer and her friend Steve Turkenkopf of York and Yvonne D. Clutter and her husband Ricky L. of Brogue. He was the loving grandfather to his four grandchildren, Chandra Showers of Chambersburg, Karrie Mentzer of Waynesboro,Pa, Derrick Clutter and his wife Sarah of Stephenville, TX and Jamie Clutter Weathersbe and her husband Jamar of Warsaw, IN, along with nine great grandchildren, Ember Showers, Geroge “Trae” Coldsmith, Dakota Coldsmith, Elijah Sease, Tyler Sease, Taryn Clutter, Derrick Clutter, Jr., Rylan Clutter, Amaria Weathersbe and one one the way, and one great, great granddaughter, Avery Sease, and one on the way. Pastor Gaither was one of ten children. He is survived by a sister, Rose Buckler of Inwood, WV and a brother, Joseph Gaither of Martinsburg, WV, and numerous nieces and nephews. He was preceded in death by seven siblings, James Costello, Nellie Bridgett, Marguerite Barker, Lorraine Kinder, William Gaither, Melvin Gaither and an infant at birth. Family and friends my view Pastor Gaither on Tuesday, Sept. 11th, from 6-8 pm at Burg Funeral Home, Inc., 134 W. Broadway, Red Lion and on Wednesday, Sept. 12th from 10-11 am at Bethany UM Church, 121 W. Broadway, Red Lion. A Service to Honor and Praise Gaither’s life will begin at 11 am at the church, with his pastor, Rev. Ronald L. Doverspike officiating. Burial will follow in Yoe Union Cemetery with full military rites being offered by the York County Veterans Honor Guard. Pastor Gaither was a wonderful husband, father and grandfather. His family was very important to him and he enjoyed spending time with them. He is remembered as being a kind, compassionate, caring and considerate man. He never got angry or raised his voice and his children say he is as close to being a saint as they come. He loved everyone and also had a great love for animals. He would preach using real life stories to teach us a lesson of the Lord and at times became very emotional at the pulpit. He was loved by everyone who knew him and will be greatly missed. In our hearts forever, until the day we will meet again in heaven. In lieu of flowers, contributions may be offered to: Bethany UM Church, 121 W. Broadway, Red Lion, PA. 17356. www.BurgFuneralHome.com

Rev. Golden A. Gaither, formerly of Red Lion, went from life to Life Eternal on Friday, September 7, 2018 at 12:30 pm at Rest-Haven York at the age of 90. He was the husband of Barbara H. (Hess) Gaither who resides in York. They were married... View Obituary & Service Information

The family of Rev. Golden A. Gaither created this Life Tributes page to make it easy to share your memories.

Send flowers to the Gaither family.