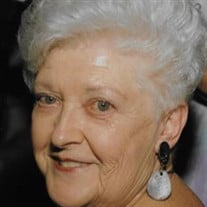 Grace A. (Paules) McWilliams, formerly of Felton, entered into God’s eternal care on Saturday, June 5th, 2021, at her daughter’s residence with whom she resided, at the age of 92. She was the wife of the late Roger C. McWilliams who entered into God’s care on January 24, 2007. She was born in Yoe on February 6, 1929 and was the daughter of the late Elmer M. and Erma R. (Blessing) Paules. She was a postal clerk at the Brogueville, now known as Brogue Post Office, where she worked alongside her late husband who was the postmaster for 34 years. They also owned and operated Brogueville Store. She was a member of Chapel Church, A United Methodist Congregation her entire life and attended Sunday School. Grace enjoyed cooking, cleaning, gardening, and spending time with her family. She was a very humble, quiet and gentle person who loved the Lord and her family. Grace is survived by her two daughters, Angelene D. McWilliams of Red Lion: Crystal B. Boring and husband George E. Jr. of Mt. Wolf and her son Matthew C. McWilliams of Gretna, LA. She was the loving grandmother of two granddaughters, Jenni McWilliams of Lititz and Emily McWilliams of New Orleans, LA., and the great grandmother to Gabriel of Lititz. Grace leaves her three sisters, Mildred Myers of Red Lion, Dorothy Markey of Red Lion and Nancy Carlisle of Quarryville, along with a sister-in-law, Doris Knudsen of Mt. Wolf. She was preceded in death by a daughter, Monica McWilliams and her brother Earl Paules. A viewing will be held on Thursday, June 10th, from 10-11 AM at Chapel Church A United Methodist Congregation, 3050 Cape Horn Road, Red Lion. A Service of Honor and Praise for Grace will begin at 11 AM at the church with Rev. Lee K. Nanfelt, pastor of Valley View Alliance of Hellam, officiating. Burial will follow the service at Chapel “Heiland View” Church Cemetery. In lieu of flowers, contributions in Grace’s memory may be offered to: Chapel Church A United Methodist Congregation, c/o: “Missions”, 3050 Cape Horn Road, Red Lion. or the York East Camp, Gideons International, PO Box 561, Red Lion, PA 17356. Online condolences may be offered at: www.BurgFuneralHome.com

Grace A. (Paules) McWilliams, formerly of Felton, entered into God&#8217;s eternal care on Saturday, June 5th, 2021, at her daughter&#8217;s residence with whom she resided, at the age of 92. She was the wife of the late Roger C. McWilliams... View Obituary & Service Information

The family of Grace A. (Paules) McWilliams created this Life Tributes page to make it easy to share your memories.

Grace A. (Paules) McWilliams, formerly of Felton, entered into...

Send flowers to the McWilliams family.