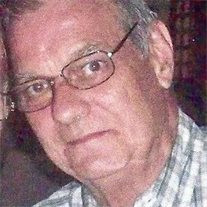 Gregory "Greg" E. Emenheiser, 64, entered into rest after a brief illness on Sunday, August 26, 2012, at 2:15 a.m. at his residence. He was the husband of Charlene F. (Roseman) Emenheiser, whom he married on May 31, 1968. Born in York on July 19, 1948, he was the son of the late Harold E. and Geneva (McGuffie) Emenheiser. He was a Laser Operator at Harley Davidson York, Inc., where he retired in 2007 after 40 years of service and was a United State Army Veteran, serving during the Vietnam War. Greg was a member of Winterstown United Methodist Church for 37 years, where he served as an usher and a former member of the Winterstown EV Cemetery Association. In addition to his wife, Charlene, he is survived by one son, Brian D. Emenheiser and wife, Kelly of Red Lion; daughter, Holly A. Taylor and husband, Matthew of York; four grandchildren, Ashley and Megan Emenheiser of Red Lion and Ryan and Cameron Taylor of York; two brothers, Denny and Mike Emenheiser, both of Red Lion; and several nieces and nephews. Viewings will be Thursday from 7 to 9 p.m. at Burg Funeral Home, Inc., 134 W. Broadway, Red Lion, and Friday from 9 to 10 a.m. at Winterstown UM Church, 12184 Winters-town Road, Felton. The service will be at 10 a.m. on Friday at the church. His pastor, the Rev. Keith J. Schmuck, will officiate. Burial will be in Winterstown EV Cemetery with full military rites by the York County Veterans Honor Guard. In Lieu of flowers, contributions may be offered to, Winterstown UM Church, 12184 Winters-town Road, Felton PA 17322; or to York Health Foundation, Cancer Patient Help Fund, 912 S. George St., York, PA 17403. Greg was a very dedicated family man, a wonderful husband to Charlene for 44 years, father and grandfather. He will be missed by all of his many friends and family. Online condolences may be offered at www.BurgFuneralHome.com

The family of Gregory E. Emenheiser created this Life Tributes page to make it easy to share your memories.

Gregory &quot;Greg&quot; E. Emenheiser, 64, entered into rest after a brief...

Send flowers to the Emenheiser family.