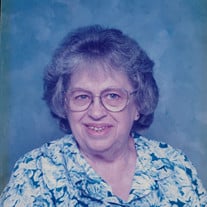 Gwendolyn M. (Routson) Dixon, formerly of Red Lion, entered into God’s care on Saturday, May 25, 2019 at 6:15 am at Manor Care York-South, at the age of 86. She was the wife of the late Richard C. Dixon. Gwen was born in Lincoln, IL on May 27, 1932 and was the daughter of the late George L. and Goldie A. (Wyles) Routson. She was the owner and operator of Dixon’s Coney Island Restaurant in Galesburg, IL for many years. She attended the Emmanuel United Church of Christ, in Freysville, with her son and daughter in law, with whom she resided, when she was able. Gwen loved playing bingo, doing puzzles, being involved in family events and spending time together and especially loved her dog, Buffy. She enjoyed reading her Bible and going to church. She is survived by her son, Richard “Rick” L. Dixon and his wife Rhonda of Red Lion. She was the loving grandmother to, Mindy Motteler of Peoria, IL, Jennifer May and her husband Brandon of Red Lion, Michael Dixon and his partner, Tony Schneider of York, Blake Biery and his wife Meaghan of San Diego, CA, Bryan Dixon and his girlfriend, Chelsea Parkent of Felton and Aaron Dixon of Red Lion, and great grandmother to, Johnathan P.H. Biery, Alexandra E. Motteler, Jaxson J. Motteler, Cooper A. May and Natalie G. May. Gwen is also survived by her sister, Maxine Coombs of Lincoln, IL, along with numerous nieces and nephews. She was preceded in death by a daughter, Sharon Dyer, a great granddaughter, Addison Grace Biery, a brother, George Routson, a sister, Donna Adkins, and her beloved dog, Buffy. Local services will be private and at the convenience of the family. A Graveside Service to Honor and Praise Gwen will be held on June 8, 2019 at 10:30 am at Galesburg Memorial Park Cemetery in Galesburg, IL. Burg Funeral Home, Inc. 134 W. Broadway, Red Lion, is assisting the family with the arrangements. In lieu of flowers, contributions may be offered to: Emmanuel (Freysville) United Church of Christ, 1625 Windsor Road, Red Lion, PA 17356. A golden heart stopped beating, hardworking hands at rest. God broke our hearts to prove to us, He only takes the best. www.BurgFuneralHome.com

The family of Gwendolyn M. (Routson) Dixon created this Life Tributes page to make it easy to share your memories.

Send flowers to the Dixon family.