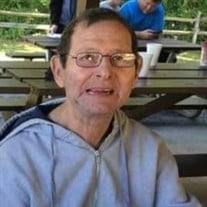 Harry E. Walker, Jr., of York, entered into the arms of his Lord and Savior, on Saturday, January 29, 2022, at 8:30 am, at Wellspan York Hospital at the age 86. He was the son of the late Harry E. and Pauline M. (Frey) Walker. He was born on November 5, 1935 in Felton. Harry worked at the Sheltered Workshop and Shadowfax Corporation. He was a former member of the Windsor Fire Company where his assisted with the fire police. He is remembered as being a very spunky person. Harry was one of thirteen children, Martin Walker and Esther Walker, both of York, Jerry Walker of Red Lion, Donald Walker of York, Beatrice Hamilton and Rev. Ann Overmiller both of Red Lion and Cindy Miller of Dover and he has numerous nieces and nephews. He was preceded in death by his siblings, Juanita Linebaugh, Patsy Arendt, Mildred Smith, Gerald Walker and Walter Walker. Cremation will take place with Burg Funeral Home, Inc., 134 W. Broadway, Red Lion. Family and friends are invited to attend the Memorial Service of Honor and Praise on Saturday, February 12th, at 11 AM, at the funeral home. A time to share special memories will take place from 10 to 11 am, just prior to the start of the service. Pastor Larry W. Partlett, from Bethlehem, Springvale, Stonepile churches, will officiate. Burial will take place at Prospect Hill Cemetery at the convenience of the family. In lieu of flowers, contributions in memory of Harry may be offered to the Alzheimer’s Association, GPA, 2595 Interstate Drive, Ste. 100, Harrisburg, PA 17110. Online condolence may be offered at: www.BurgFuneralHome.com

The family of Harry E. Walker Jr. created this Life Tributes page to make it easy to share your memories.

Harry E. Walker, Jr., of York, entered into the arms of his Lord...

Send flowers to the Walker family.