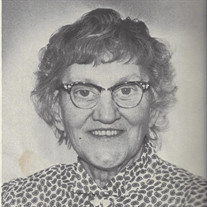 Hazel V. (Slagle) Stephens Smith of York, was called Home to be with her Lord and Savior, on Sunday, October 25, 2020 at 1:05pm , at Country Meadows at Leader Heights at the age of 92 with her husband, John A. Smith, Sr., to whom she married on November 19, 1995, by her side. They celebrated 25 years of marriage together. Hazel was born in Huntingdon County on January 8, 1928 and was the daughter of the late Harry J. and Mary A. (Lewis) Slagle. She was a graduate of Huntingdon Senior High School, Class of 1945. Hazel inherited the gene from her father of being very good with mathematics. With this talent she was able to obtain a job with McCrory’s Distribution Center, in their financial department, where she retired after 60 years of service. She also used her math skills growing up at home assisting her father with his masonry work. She learned at a young age how to be a productive and hard worker. Hazel worked on a chicken farm where she gathered eggs. When she started school at the age of 4, she walked to school every day. Hazel enjoyed word searches, crocheting, knitting, traveling and reminiscing about her love of roller skating. She and her friends would also join the USO, providing entertainment to the enlisted soldiers. Hazel attended the Red Lion Bible Church. Hazel leaves behind her husband, John, of York, three sons, John W. Stephens (Gail) of Old Orchard Beach, Maine, Gard W. Stephens, Jr. (Susan) of Mount Wolf, Drew A. Stephens (Gloria) of Colorado Springs, and one daughter, Judy Plubell (Alfred) of Dover. She was the grandmother to eight grandsons and great grandmother of numerous great grandchildren along with several nieces and nephews. She has four stepchildren Ida Stup (John) of York, Rebecca Mitzel (Dale) of Red Lion, Grace Urey of Dallastown and Stephen Smith of Dallastown. She had nine step grandchildren and seven step great-grandchildren. Hazel was preceded in death by her son, Drex E. Stephens who entered into rest on November 6, 1991, a grandson, Alfred S. Plubell, Jr. who entered into rest on July 9, 1993, her six siblings and three stepchildren, Patty Emmel, John Smith Jr., and Kenneth Smith. A viewing will be at Burg Funeral Home, Inc., 134 W. Broadway, Red Lion on Monday, November 2nd from 10 to 11 am. A service of Honor and Praise will begin at 11 am with her pastor, Rev. Steven A. Schmuck, officiating. Burial will be at Susquehanna Memorial Gardens. As per our Governor, we will try to observe the limited number of guests in the funeral home at one time, so please be aware of that as you are visiting, others behind you are waiting to enter. A mask is recommended and social distancing will be observed. In lieu of flowers, contributions in Hazel’s memory, may be offered to the Red Lion Bible Church, 105 Springvale Road, Red Lion, PA 17356.

Hazel V. (Slagle) Stephens Smith of York, was called Home to be with her Lord and Savior, on Sunday, October 25, 2020 at 1:05pm , at Country Meadows at Leader Heights at the age of 92 with her husband, John A. Smith, Sr., to whom she married... View Obituary & Service Information

The family of Hazel V. (Slagle) Stephens Smith created this Life Tributes page to make it easy to share your memories.