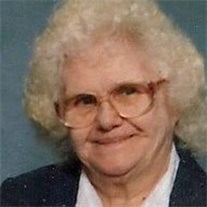 Helen S. (Byers) Frey, 91, formerly of Hellam, entered into rest on Wednesday, January 23, 2013, at 11:15 a.m. at Colonial Manor Nursing and Rehabilitation Center. She was the wife of Roy G. Frey, who entered into rest on February 16, 2005. Born in Conestoga, Lancaster Co., on January 29, 1921, and was the daughter of the late Benjamin H. and Clara (Rutter) Byers. She was a homemaker and a longtime active member of Red Lion Bible Church. She is survived by two sons, Robert J. Frey and wife, Cindy of Airville and James D. Frey and wife, Peggy of Airville; four grandchildren, Amber, Gina, Rebecca and William Frey; one brother, Harry Byers of Conestoga; two sisters, Lillie Rice of Muncy, and Dorothy Kauffman of Lancaster; and numerous nieces and nephews. She was preceded in death by eight siblings. Viewing will be Monday from 6 to 7 p.m. at Burg Funeral Home, Inc., 134 W. Broadway, Red Lion. The service will be 7 p.m. Monday at the funeral home, with her pastor, the Rev. Steven A. Schmuck, officiating. Burial will be private and at the convenience of the family at Mt. Zion Baptist Church Cemetery in Brogue. In lieu of flowers, contributions may be offered to: Red Lion Bible Church, 105 Springvale Road, Red Lion, PA 17356. Gram was a wonderful Mother and Grandmother. She loved cooking, cleaning, quilting and gardening. Her family was very important to her and she always made them her priority. Online condolences may be offered at www.BurgFuneralHome.com

The family of Helen S. (Byers) Frey created this Life Tributes page to make it easy to share your memories.