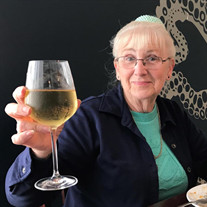 Helen Mattox, 75, died Thursday, March 19, at York Hospital. She was the wife of the late Joseph Lee Mattox, who made her smile and gave her some of the happiest times of her life. She missed him every day. Born July 11, 1944 in Windsor, she was the daughter of the late Harvey and Ida McSwine of Red Lion. Mrs. Mattox nearly died giving birth to her only child, the late Robin Sue Combs of Thomasville. When the doctors told Mrs. Mattox to go home and rest with her new baby, she instead went to the fields to pick tomatoes on her hands and knees. Her work ethic and service to others defined her life. She leaves a brother, Barry E. McSwine of Windsor. She also leaves a grandson, Michael P. Kauffman of Red Lion, to whom she was a devoted caregiver, and a granddaughter, Christina Kauffman of York, who was her movie-night pal and sidekick for garbage picking until the outlawed large trash day. Mrs. Mattox was a humanitarian who could never understand or accept people mistreating other people. She was a supporter of Native people and enjoyed attending powwows. She was fiercely independent, a parsimonious Pennsylvania Dutch and Irish woman who was inadvertently the most eco-friendly person in York County. She was a kind-hearted person who people remembered meeting because she was genuine and engaged. She climbed trees well into her 70s and she would want you to do the same. She loved to laugh and had a sparkle in her eye when she smiled and she will be deeply missed. Due to current crowd-size restrictions, the family will have a graveside service on Tuesday, March 24 at 11 am. All planning to attend should meet at Salem Community Cemetery (near Martinsville). The church address is 460 Salem Church Road, Windsor, the cemetery is across the street. Burg Funeral Home, Inc., 134 W. Broadway, Red Lion is assisting the family with the arrangements. A celebration of life service will be held on her birthday, July 11, 2020. The location and time of the service will be published in a follow up obituary, the week before the celebration. In lieu of flowers, please perform a random act of kindness in her memory.

Helen Mattox, 75, died Thursday, March 19, at York Hospital. She was the wife of the late Joseph Lee Mattox, who made her smile and gave her some of the happiest times of her life. She missed him every day. Born July 11, 1944 in Windsor,... View Obituary & Service Information

The family of Helen L. (McSwine) Mattox created this Life Tributes page to make it easy to share your memories.

Send flowers to the Mattox family.