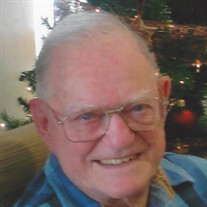 Herman B. Snyder, formerly of Red Lion, passed from this life to Eternal life on Saturday, November 17, 2018 at 4:45 pm at the Mennonite Home in Lancaster at the age of 90. He was the husband of the late Marian L. (Hoke) Snyder who entered into rest on May 27, 2015, to whom he was married for 67 years. Herman was born on January 2, 1928 and was the son of the late Herman B. and McCleda (Gentzler) Snyder. He was a supervisor at the former Flinchbaugh Products, now known as Olin Corporation, retiring after many years of service on May 1, 1990. He was a longtime and very active member of the Windsor Assembly of God Church where he served on the board and was Treasurer for 52 years. He was an avid bowler for many years playing at the Red Lion Bowling Alley, enjoyed fishing, playing golf and going hunting in all seasons. Herman served his country in the United States Navy. He was the loving father to five children, Jeanne E. Snyder Shipp, wife of Donald of Port Orange, FL, William R. Snyder, husband of Betty of Chambersburg, Betty Jo Snyder of Port Orange, FL, David H. Snyder, husband of Elizabeth of Chambersburg and Terry L. Snyder, husband of Sharon of Red Lion. He had five grandchildren, Tracy Wenzel (David) of Orlando, FL, Matthew Snyder (Lyndsay) of Chambersburg, Lydia Keplinger (Gary) of Chambersburg, Daniel C. Snyder of Richmond, VA and Kyle Snyder of York, and he had five great grandchildren. Herman has a brother, Rev. Dennis Snyder of Pottstown and a sister, Donna Snyder Chandler of Aurora, CO. along with numerus nieces and nephews. He was preceded in death by a sister, Zelda Leland and his brother, Wayne Snyder. A Service of Honor and Praise for Herman will be on Saturday, Nov. 24th, at 10:30 am at Burg Funeral Home, Inc., 134 W. Broadway, Red Lion, with his brother, Rev. Dennis Snyder, officiating. Viewing will be one hour prior to the service, starting at 9:30 am. Burial will follow the service at Windsor Cemetery with full military rites offered by the York County Veterans Honor Guard. In lieu of flowers, contributions may be offered to: Windsor Assembly of God Church, “Missions”, 21 N. Penn Street, Windsor, PA 17366. “But seek ye first the kingdom of God, and his righteousness; and all these things shall be added unto you.”

Herman B. Snyder, formerly of Red Lion, passed from this life to Eternal life on Saturday, November 17, 2018 at 4:45 pm at the Mennonite Home in Lancaster at the age of 90. He was the husband of the late Marian L. (Hoke) Snyder who entered... View Obituary & Service Information

The family of Herman B. Snyder created this Life Tributes page to make it easy to share your memories.

Herman B. Snyder, formerly of Red Lion, passed from this life...