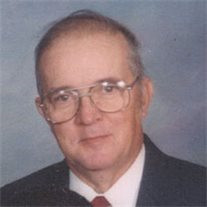 Horace W. "Bill" Tredway, 78, went to be with the Lord at 8 p.m. Monday, September 6, 2010, at Manor Care Dallastown surrounded by his loving family. He was the husband of Shirley A. (Rupp) Tredway, whom he married September 18, 1954. Born in York, on March 22, 1932, he was the son of the late Horace W. Tredway, Sr. and the late Alice L. (Dubbs) Wood, and stepson of the late Donald Wood. Mr. Tredway worked in Harrisburg with the U.S. Postal Service, retiring in 1997 after 20 years of service. He was a 1950 graduate of William Penn High School and served in the U.S. Army during the Korean Conflict and also spent time in Germany. He was a very faithful member of Bethlehem Stonepile U.M. Church and a member of American Legion Dallastown Post #605. He was a member of Boy Scouts of America, where he was Scout Master for 37 years at the previous Emmanuel U.M. Church in Windsor Troop #44. In addition to his wife, Shirley, he is survived by two daughters, Suzette E. Snyder of Red Lion and husband, Matthew, and Cynthia A. Holland of York and husband, Todd; three grandchildren, Kara Holland, Paige Holland, and Joseph Burns and his wife, Alexa; one great-grandson, Landon William Burns; and brother-in-law, Darwin L. Rupp of Dallastown. He was preceded in death by a son, Jeffrey Lee Tredway, who went to be with the Lord on August 27, 2003. There will be a viewing from 6 to 8 p.m. Thursday, at Burg Funeral Home, Inc., 134 W. Broadway, Red Lion, and on Friday from 9 to 10 a.m. at Bethlehem Stonepile U.M. Church, 250 Bethlehem Church Road, Red Lion. The service will begin at 10 a.m. Friday at the church with his pastor, the Rev. Thomas R. Osenbach, officiating. Burial will be at Bethlehem Stonepile U.M. Church Cemetery with full military rites by the Dallastown American Legion Post #605. Contributions may be offered to Boy Scouts of American, 2139 White St., York, PA 17404. Bill was a wonderful husband to Shirley and a great father, grandfather, and great-grandfather. He was a very caring and giving man who always put the needs of others before his own. He enjoyed camping, wrestling, and hiking (he hiked the C & O canal). But most important in his life were his family and his dogs. He will be greatly missed by all who knew him. Online condolences may be made at www.BurgFuneralHome.com

Horace W. "Bill" Tredway, 78, went to be with the Lord at 8 p.m. Monday, September 6, 2010, at Manor Care Dallastown surrounded by his loving family. He was the husband of Shirley A. (Rupp) Tredway, whom he married September 18, 1954. Born in... View Obituary & Service Information

The family of Horace W. "Bill" Tredway created this Life Tributes page to make it easy to share your memories.