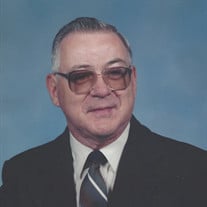 On January 6, 2019 at 5:10 AM, the Good Lord welcomed the spirit of Hugh M Miller, 93 of Airville (Sunnyburn), PA from his residence at Victorian Villa, Dallastown, PA. He was the son of the late E. Howard Miller and A. Martha (Martin) Miller. He was the husband of Dorothy R. (Bair) Miller to whom he was married for 41 years until her death April 3, 1990. He is survived by a daughter, Amy I. Brenner (Jeffrey) of Felton, PA, a son, Michael M. Miller (Dottie) of Harrisburg, PA, two grandsons, Brandon M. Miller of Sparks, MD and Matthew M. Miller also of Harrisburg, PA. Two step-granddaughters Heather McGowan of Lebanon, PA and Jennifer Altigieri of Campbelltown, PA and 5 step-great grandchildren Ashton, Braden, Nico, Cheyenne and Kimber. He is also survived by one brother, Lester J. Miller of Shrewsbury, PA., and numerous nieces and nephews. Along with his parents and wife, he was pre-deceased by two sisters, Kathleen Collier and Janet Burk. Mr. Miller was one of the last surviving members of his 1941 graduating class from the Lower Chanceford High School and he later graduated from Elizabethtown College in 1949. He was a secondary teacher for 35 years starting at Lower Chanceford, then moving on to teach when it was consolidated into the Red Lion Area School District. He taught mostly German and Math and mentored the photography staff retiring in 1985. In World War II, he served honorably with 75th Infantry Division in Europe including the famous Battle of the Bulge. He earned 3 battle stars and the Bronze Star medal. He was a former leader and committeeman for Troop 42 Woodbine/Airville, Boy Scouts of America. He was a member of the National Education Association and a life member of the PA State Education Association. He was also a member of the Historical Society of York County and the Lancaster Mennonite Historical Society. He was a member of the former Red Lion Chapter#1773 of the AARP. He was a member and director for the Conservation Society of York County often volunteering at Indian Steps Museum with his late good friend, W. Donald Grove. He was a recent member of the American Legion Slate Ridge Post 182, Whiteford, MD and a charter member and a director of the South Central PA Genealogical Society. But aside from his love for his family, his greatest devotion and dedication was to the ‘little white church down the road’, Pine Grove Presbyterian Church. There he served as an elder and clerk of session, the teacher of the Sunday school adult class, and choir director for many, many years. Not to be forgotten were his stints along with his in-laws Newton, John, and George Bair as the superb mashed potato team for the annual church turkey dinner. He enjoyed playing baseball in his younger years, hunting and fishing, bowling, branching out the roots of the family tree and most definitely, photography. Whatever role he played, or challenge he faced in his life, he did so with a sense of responsibility, a sense of right and wrong, and most assuredly a sharp-witted sense of humor, even when the darkness of dementia began to whittle away at the light of his brilliant mind. A viewing will be held at Burg Funeral Home, 134 W. Broadway, Red Lion, PA on Thursday, January 10th from 6 to 9 PM and on Friday January 11th from 10 to 11:00 AM at Pine Grove Presbyterian Church, 4263 Delta Road, Airville, PA. A Service of Honor and Praise for Hugh will begin at 11 AM at his church with Rev. James B. Shuler officiating. Burial will be at Pine Grove Presbyterian Cemetery, with full military rites offered by the York County Veterans Honor Guard. In lieu of flowers the family requests that donations be made to Pine Grove United Presbyterian Church or to the Conservation Society of York County/Indian Steps Museum, 205 Indian Steps Rd. Airville, PA 17302. The family would like to thank the fine staff of Victorian Villa and Grane Hospice for their superb care during Dad’s final days. www.BurgFuneralHome.com

On January 6, 2019 at 5:10 AM, the Good Lord welcomed the spirit of Hugh M Miller, 93 of Airville (Sunnyburn), PA from his residence at Victorian Villa, Dallastown, PA. He was the son of the late E. Howard Miller and A. Martha (Martin) Miller.... View Obituary & Service Information

The family of Hugh M. Miller created this Life Tributes page to make it easy to share your memories.