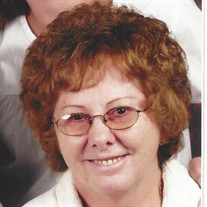 Ilene M. (Eckert) Smith, of Felton, went to her eternal home to reunite with her late husband, Daniel L. Smith, Sr. who entered into rest on December 20, 2016. She closed her eyes peacefully on Christmas Day, at 6:10 am at Manor Care Dallastown, at the age of 82. She was born in Freysville, on August 17, 1938, and was the daughter of the late Winfield O. and Catherine V. (Yohe) Eckert. She worked for the Eastern School District as a custodian at Kreutz Creek Elementary School. She was a member of the River’s of Life Fellowship Church in York, Ilene enjoyed drawing, shopping, going to the beach and spending time with her grandchildren and family. Ilene and Daniel had three children. She is survived by a son, Daniel L. Smith, Jr. and his wife Sandy of Red Lion, and a daughter, Crystal L. Lawrence, and her husband Michael of Red Lion. She was the loving grandmother to, Jamie Garee of Hellam, Kenny Nace of York, April Geesey of Wrightsville, Daniel L. Smith III of Yoe, Justin E. Smith of Felton, Bree Arkulari of Manchester, Theron Lawrence and Taelyn Lawrence both of Red Lion. She was the great grandmother of twelve great grandchildren with one on the way. Ilene also has a sister, Sandy Arnold of Red Lion. She was preceded in death by a daughter, Cherylann Nace in 1985, and a great granddaughter, Madyson. A Graveside Service of Honor and Praise for Ilene will be private and at the convenience to the family. Her Pastor, Doug Heininger will officiate. Burial will take place at Susquehanna Memorial Gardens. Burg Funeral Home, Inc., 134 W. Broadway, Red Lion will be assisting the family with the arrangements. In lieu of flowers, contributions in Memory of Ilene may be offered to: Alzheimer’s Association, Greater PA Chapter, 2595 Interstate Drive., Suite 10, Harrisburg, PA 17110 or the National Breast Cancer Foundation, Inc, at www.nationalbreastcancer.org. Online condolences may be offered at: www.BurgFuneralHome.com

Ilene M. (Eckert) Smith, of Felton, went to her eternal home to reunite with her late husband, Daniel L. Smith, Sr. who entered into rest on December 20, 2016. She closed her eyes peacefully on Christmas Day, at 6:10 am at Manor Care Dallastown,... View Obituary & Service Information

The family of Ilene M. (Eckert) Smith created this Life Tributes page to make it easy to share your memories.