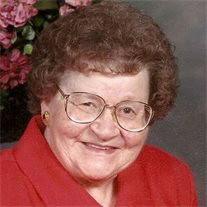 Irene L. (Stabley) Hilt departed this life unexpectedly and went to be with her Lord and Savior Jesus Christ on Saturday, May 4, 2013, at 1:15 a.m., at York Hospital, at the age of 85 and 66 years in Christ. She was the wife of Eugene O. Hilt, whom she married on August 19, 1950. She was born in Red Lion the daughter of the late Emory D. and Mary F. (Seaks) Stabley. Irene worked as a nurse at York Hospital, Barley's Convalescent Home, and as a private duty nurse until her retirement in 1985. She was a Red Lion High School graduate and a graduate of the LPN nursing program at York Hospital. She was a longtime member of Windsor Church of God, where she was former SS teacher, Deaconess and Missionary President and was a member of Gideon's. In addition to her husband, Eugene; she is survived by a son, David E. Hilt and his wife, Joyce of York; a daughter, Judy M. Eckenrode of Red Lion; four grandchildren, Jennifer M. Purvis of Ariz., Melissa A. Burdette, Tabitha L. Heilman, and Donald E. Heilman, Jr. all of York; 12 great-grandchildren, two great-great-grandchildren; a sister, Pauline Tyner of Missouri; nieces and nephews and her cousin, Earlene Shellenberger of Dallastown, to whom she was very close. She was preceded in death by a sister, Elsie E. Stabley; and a son-in-law Lynn Eckenrode. There will be a viewing from 6 to 8 p.m. on Wednesday at Burg Funeral Home, Inc., 134 W. Broadway, Red Lion and 9 to 10 a.m. Thursday at Windsor Church of God, 1125 Manor Road Windsor. The service will be 10 a.m. Thursday at the church with her pastor, Anthony D. Zumbo, officiating. Burial will be in Windsor Church of God Cemetery. In Lieu of flowers, contributions may be offered to: AMG International, 6815 Shallowford Road, Chattanooga, TN 37421; or to New Tribes Mission, 1000 E. First St., Sanford, FL 32771. Irene's greatest love was spending time with her husband of 62 years and her family. She enjoyed sewing, needlework, reading her Bible, singing hymns, and playing games. She loved entertaining missionaries in her home. She will be greatly missed by her family, friends, and acquaintances. Online condolences may be made at www.BurgFuneralHome.com

Irene L. (Stabley) Hilt departed this life unexpectedly and went to be with her Lord and Savior Jesus Christ on Saturday, May 4, 2013, at 1:15 a.m., at York Hospital, at the age of 85 and 66 years in Christ. She was the wife of Eugene O. Hilt,... View Obituary & Service Information

The family of Irene L. (Stabley) Hilt created this Life Tributes page to make it easy to share your memories.