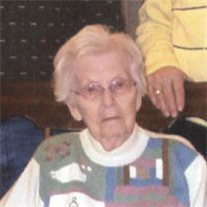 YORK Iva K. (Thoman) Glatfelter Shaffer, 94, entered into rest after a brief illness at 5 a.m. Thursday, July 7, 2011, at Normandie Ridge. She was the wife of Raymond C. Glatfelter, who died January 29, 1969, and Walter R. Shaffer, who died September 25, 1976. Born in Heidelburg Twp., on May 31, 1917, she was the daughter of the late John A. and Ellen L. (Miller) Thoman. She was an operator at the former AMP, Inc., now Tyco, retiring after many years of service. Mrs. Shaffer was a life member of Greenmount U.M. Church in Glen Rock, where she was formerly in charge of the Children's Department and was a former custodian. She was also a member of AARP Chapter #24, Leisure Club of Jacobus, and the York Rose Club. Surviving are one daughter, Shirley M. Alwood of York; four sons, Lamar Glatfelter and Thomas A. Glatfelter, both of Glen Rock, Timothy J. Glatfelter of Florida, and Stanley C. Glatfelter of York; one stepson, Algard Shaffer of Spring Grove; 11 grandchildren; 13 great-grandchildren; two great-great-grandchildren; three brothers, Earl W. Thoman of Glen Rock, and Kenneth Thoman and Richard Thoman, both of York; and numerous nieces and nephews. She was preceded in death by a son, Barry E. Glatfelter in 2005; a grandson, Jeff Alwood in 1986; and three brothers, Robert E., Victor A., and Raymond L. Thoman Viewing will be Sunday, July 10, from 12 to 1 p.m. at Greenmount U.M. Church, 4242 Greenmount U.M. Church Road, Glen Rock. The service will begin at 1 p.m. Sunday with her pastor, the Rev. Richard W. Lowe, officiating. Burial will be at Greenmount U.M. Cemetery. Burg Funeral Home, Inc., 134 W. Broadway, Red Lion, is handling the arrangements. In lieu of flowers, contributions may be offered to Greenmount U.M. Church, c/o Mary Warner, P.O. Box 159, Codorus, PA 17311; or to the Benevolent Care Fund at Normandie Ridge, Albright Care Services, 90 Maplewood Drive, Lewisburg, PA 17837.

The family of Iva (Thoman) Glatfelter Shaffer created this Life Tributes page to make it easy to share your memories.