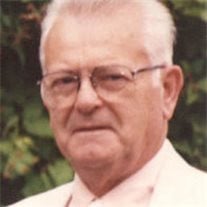 J. Kerr Anderson, 97, entered into rest at 7 a.m. on Thursday, May 6, 2010, at Normandie Ridge. He was the husband of Margaret E. (Reinecke) Anderson, who entered into rest on July 5, 1999. He was born in Winterstown on March 18, 1913 , and was the son of the late Ross C. and Margaret Jane (Gemmill) Anderson who were formerly from Sunnyburn. He started an auto and farm machinery repair service along with a fuel business in Sunnyburn. He was a founder and treasurer of the Airville volunteer Fire Company. In the 1960’s he assumed ownership of his father, R.C. Anderson’s insurance agency. When Horace Grove became a county commissioner, he finished out Grove’s term as tax collector of Lower Chanceford township and was re-elected to that office for two additional terms. After selling his insurance agency, he became a property appraiser for the Mutual Insurance Company, a notary public and full agent for the state of Pennsylvania Department of Motor Vehicles. For approximately twenty years he served on the advisory board of directors of the former Hamilton Bank of Red Lion and Stewartstown, until his retirement in 1985. An original member and vice chairman of the York County Parks Board, he was actively involved in the development of Rocky Ridge Park, Nixon Park and Rudy Park. He was a life-time member and past president of the York County Conservation Society and a long time member and past president of the Mason Dixon Lions Club, for which he served two terms as district chairman of District 14C. A member of McKendree United Methodist Church in Airville where he served as church treasurer for 25 years. His interests included wood-working and antique cars. A 1923 Model T Ford sedan, which he restored, won an Antique Auto Association prize at a meet in Hershey. He was on the Pennsylvania Power and Light Holtwood advisory board and was also involved in the energy education program sponsored by Penn State. He is survived by one son-, Alan L. Anderson and wife, Kathryn of Ukiah, Calif.; one daughter, Janet M. Anderson of Charlottesville, Va.; two grandchildren; and one great-granddaughter. Viewing will be 10 to 11 a.m. Tuesday, May 11, 2010, at McKendree United Methodist Church, 3708 Delta Road, Airville. Burg Funeral Home, Inc., 134 W. Broadway, Red Lion, is handling the arrangements. The service will follow at 11 a.m. at the church, with his pastor, Rev. David A. Walker, officiating. Burial will be in McKendree United Methodist Cemetery. Memorial contributions may be offered to McKendree United Methodist Church, 3708 Delta Road, Airville, PA 17302.

The family of J. Kerr Anderson created this Life Tributes page to make it easy to share your memories.

Send flowers to the Anderson family.