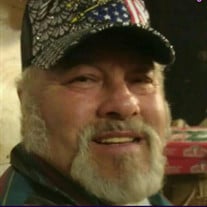 Jacinto “Tony or Pap” R. Torre, of Yoe, went home to his Lord and Savior, surrounded by his loving family, and friends, on Saturday, March 9, 2019, at 4:57 pm at Wellspan York Hospital at the age of 75. He was the common law husband of Linda L. Herman, of Yoe, to whom they celebrated 44 years together. Tony was born in Adjuntas, Puerto Rico on January 14, 1944 and was the son of the late Confesor Rosado and Maria Torre. He served in the Army in Puerto Rico, prior to coming to live in the United States. He worked as a welder for the Maryland and Pennsylvania Railroad, Emons, York, PA., for 28 years, until an injury forced him to retire. Tony enjoyed hunting and fishing, especially with his sons and grandsons. He was a man loved by many. Pap's doors were always opened to anyone who needed help and every Sunday he held a family dinner for anyone to join him. He was the kind of man who would give the shirt off his back to others in need. Tony was not the kind of person to hold a grudge or harbor ill will against anyone. No matter what the circumstances, he would always welcome you back by his side. He truly did love everyone unconditionally. Pap was a family man who loved his children and grandchildren and always looked forward to the times that they shared together. Besides his wife, Linda, he leaves children, Joe L. Herman and his wife Shauna A. of Red Lion, Angela M. Herman of York, Geraldo Rosado Plaza and his wife Malissa, Jacinto (Bang) Deacon, Maria Rosado, Juz Leida Rosado, Carmen Rosado and Jonathan Weaver. He was the loving grandfather to, Juan Martinez, Jr., Carmen L. Martinez, Eden Martinez, Andrew Herman, Alesha Herman, Lorraine Martin, Jordan Black, Kayla Weaver, and Kaylani Hoch, and numerous great grandchildren, and nieces and nephews. He also leaves his sister, Joky Rosado Torre and a brother Erasmo Rosado Torre. He was preceded in death by a daughter, Lorraine Deacon Martinez and a grandson Tyler S. Weaver, two brothers, Angel Rosado Torre and Luis Rosado Torre, and a sister, Iri Rosado Torre. Viewings for Tony will be on Sunday, March 17th, from 6-8 pm and Monday, March 18th, from 10-11 am at Burg Funeral Home, Inc., 134 W. Broadway, Red Lion. A Service to Honor and Praise Tony’s life will begin at 11 am at the funeral home, with Rev. David D. Tietje, pastor of St. John’s United Church of Christ, Red Lion, officiating. Burial will be at Susquehanna Memorial Gardens, full military honors presented by the York County Veterans Honor Guard. In lieu of flowers, the family has kindly ask, if you would like to assist with the expenses incurred during his time of illness and loss, it would be truly appreciated. You can send the donations to the funeral home at the above address. May God truly bless you for your kindness. When tomorrow starts without me, don’t think we’re far apart, for every time you think of me, I’m right there in YOUR HEART. We will miss you greatly, until the day we all meet again. www.BurgFuneralHome.com for complete obituary.

The family of Jacinto (Tony/Pap) R. Torre created this Life Tributes page to make it easy to share your memories.

Send flowers to the Torre family.