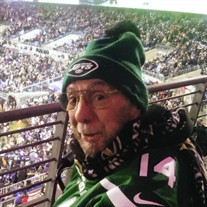 Jackie Lee Snyder, of York, entered into rest on Friday, May 8, 2020, at 4 am at Manor Care Kingston Court, at the age of 74. He was the husband of the late Janet E. (Evans) Snyder. Jackie was born in York on May 17, 1945 and was the on of the late Nolan L. Snyder and Norma (Ruby) Haga. He was part of the third class to graduate from Eastern High School, Class of 1963. After high school he went into the United States Navy, serving during the Vietnam War. He was a member of the Veterans of Foreign Wars, Post # 1446 in Red Lion and the American Legion Post #543 of Red Lion. He enjoyed sports, but was a fan of the New York Jets and the New York Yankees. Jackie leaves a daughter, Melissa A. Schroll and her husband Dale of York, two sons, Michael L. Snyder and his wife Wendy of York, and Jack A. Snyder and his wife Val of Wrightsville. He was the loving grandfather of six grandchildren; Michael L. Snyder II of Airville, Nicole L. Snyder of Delta, Roxann E. Snyder of Wrightsville, Holly A. Ginter (Vince) of York, Lauryn Snyder of Wrightsville and Colin Snyder of Wrightsville. Jackie has seven great grandchildren, Zane, Alexis, Haven, Ryleigh, Austyn, Chance and Colt, and his siblings are Melanie Filmore of Marietta, Melissa Snyder of Dallastown and Lori Snyder of Dallastown. He leaves his former wife, JoAnne Snyder of York along with nieces and nephews. He was preceded in death by a grandson, Coty Snyder in 1986 and a sister Melissa Snyder. Cremation will take place with Burg Funeral Home, Inc., 134 W. Broadway, Red Lion. Services and burial will be private and at the convenience of the family. In lieu of flowers, contributions in memory of Jackie may be offered to: York County Veterans Honor Guard, c/o: Harold Redding, PO Box 713, Mt. Wolf, PA 17347.

The family of Jackie Lee Snyder created this Life Tributes page to make it easy to share your memories.

Jackie Lee Snyder, of York, entered into rest on Friday, May...