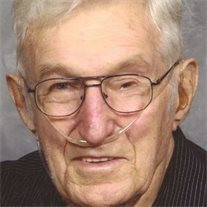 YORK James C. Bortner, Jr., 86, entered into rest on a very special day, Saturday, 1-1-11 at 2 p.m. at his residence, after a lengthy illness. He was the husband of Delores I. (Kinard) Bortner, whom he married on May 14, 1945. They celebrated 65 years together. Born in Red Lion, on April 20, 1924, he was the son of the late James C. and Mary L. (Ropp) Bortner. He worked for the former Bowen McLaughlin of York as a Senior Engineer in the Supplier Assurance Department, retiring in 1991 after 29 years of service. He was a member of St. John's United Church of Christ in Red Lion, the Victory Athletic Association, the former Moose Lodge, and the Son's of America Legion Shiloh Post #791. He loved motorcycles and enjoyed hunting big game out west. Besides his wife, Delores of York, he is survived by one son, James C. Bortner III of York; four daughters, Pamela J. Girvin of York and husband, Paul L., Debroah A. Wandling of Newton, Denise I. Carlton of Gibsonia, and Christi L. Mitzel of Red Lion and husband, James E.; six grandchildren, Traci Emswiler, Tammi Casey, Elizabeth A. Anderson, Daniel J. Carlton, Michael J. Bortner and Ryan D. Bortner; four great-grandchildren, Zachary E. Emswiler, Mitchell A. Emswiler, Nathaniel Casey and Alexandra J. Casey; and he also leaves his faithful and loving companion, Benji, his Shitzu Poodle. He was preceded in death by a sister, Arietta Hershey. Viewing will be Wednesday from 7 to 9 p.m. and Thursday from 9 to 10 a.m. at Burg Funeral Home, Inc., 134 W. Broadway, Red Lion. Service will be 10 a.m. Thursday at the funeral home, his pastor, the Rev. David D. Tietje will officiate. Burial will be at Susquehanna Memorial Gardens. In lieu of flowers, contributions may be offered to, Cancer Patient Help Fund, York Health Foundation, 912 S. George St., York, PA 17403.

YORK James C. Bortner, Jr., 86, entered into rest on a very special day, Saturday, 1-1-11 at 2 p.m. at his residence, after a lengthy illness. He was the husband of Delores I. (Kinard) Bortner, whom he married on May 14, 1945. They celebrated... View Obituary & Service Information

The family of James C. Bortner, Jr. created this Life Tributes page to make it easy to share your memories.

Send flowers to the Bortner, family.