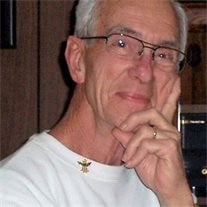 James Walton Groff, of Red Lion, went from life to Life Eternal after a lengthy illness on Tuesday, October 31, 2017, with family by his side, at his daughter's residence at 10:25 pm at the age of 82. He was the loving husband of the late Yvonne "Von" E. (Shelley) Groff to whom he celebrated 56 years of marriage prior to her passing on April 10, 2012. He was born in Falls Church, Virginia on July 16, 1935 and was the son of the late Ernest W. and Ruth V. Groff. He worked at the former Standard Register doing specialty printing, retiring in August of 1996. He was a United States Veteran, serving in the US Naval Reserves for 22 years and the Air National Guard for 9 years. He enjoyed singing and was a member of the Expression's Quartet and a member of the SPEBSQSA which is affiliated with the Barber Shop Quartet singing and belonged to the National AARP. James was a longtime and active member of St. Paul's United Methodist Church in Red Lion where he was a former Sunday School Teacher and Usher. He and Von had three children, Sharon "Sherie" D. Horne ad her companion Ryan Filmore of Wrightsville, Pamela C. Lininger and her husband Erik of Red Lion, Michael J. Groff and his wife Sharon of Red Lion. He was a loving grandfather to his four grandchildren, Tad M. Horne and his wife Corinne of York, Dustin R. Arnold of York, Matthew J. Whiteley of York and Misha N. Groff of and her Fiancé Ian Livsey of Airville and great grandfather to Damian M. Arnold and Kyleigh M. Arnold both of York. He has numerous nieces and nephews and a Sister in Law, Miriam Shellenberger of Red Lion. He was preceded in death by his brother, Gerald Groff and a brother in law, Glen Shellenberger. Viewings will be on Sunday, November 5th from 7-9 pm at Burg Funeral Home, Inc., 134 W. Broadway, Red Lion and on Monday, November 6th from 9:30 to 10:30 am at St. Paul's United Methodist Church, 45 First Ave. Red Lion. A Service of Honor and Praise for James will begin at 10:30 am at the church with his pastor, Rev. Timothy A. Funk officiating. Burial will follow at Susquehanna Memorial Gardens with full military rites being offered by the York County Veterans Honor Guard. In lieu of flowers, contributions may be offered to St. Paul's United Methodist Church, 45 First Ave., Red Lion, PA 17356 or to AseraCare Hospice, 44 Bowman Road, York, PA 17404. My life's been full; I savored much, good friends, good times a loved one's touch. Perhaps my time seemed all to brief; don't lengthen it now with undue grief. Lift up your heart and share with me, God wanted me now, He set me Free. We will meet again, until then, know that I LOVE YOU ALL.

James Walton Groff, of Red Lion, went from life to Life Eternal after a lengthy illness on Tuesday, October 31, 2017, with family by his side, at his daughter's residence at 10:25 pm at the age of 82. He was the loving husband of the late Yvonne... View Obituary & Service Information

The family of James Walton Groff created this Life Tributes page to make it easy to share your memories.

Send flowers to the Groff family.