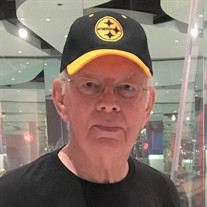 James “Jim” E. Johnson of Red Lion entered into God’s care on Friday, December 4, 2020 at 9:00 am at his residence at the age of 82. He was the husband of the late Eileen J. (Mathis) Johnson who entered into rest on December 13, 2015. Jim was born in Ridgeway, PA on July 22, 1938, and was the son of the late John Gilbert and Ruth Marie (Hartland) Johnson. He graduated from Ridgeway High School, Class of 1956. Jim worked as a can maker at B-Way Corporation in York from where he retired and at the former Continental Can. He enjoyed hunting, was an avid Pittsburgh Steelers Fan, and enjoyed spending time with his family. Sharing and making memories was especially important to him. Jim was a member of Emanuel Lutheran Church in Freysville. Jim has two daughters, Diane J. Squibbs and her husband Robert of Red Lion and Judy A. Johnson of Mountville and a twin brother, John “Jack” Johnson of Wilcox, PA along with nieces and nephews. He was preceded in death by a sister, Nancy Dargo. Cremation will take place with Burg Funeral Home, Inc., 134 W. Broadway, Red Lion. All services are private and will be held at the convenience of the family at a later date. Burial will be at Arlington Park Cemetery in New Jersey. In lieu of flowers, contributions may be offered to: Emanuel Lutheran Church, P.O. Box 2, 2650 Freysville Road, Red Lion, PA 17356.

The family of James "Jim" E. Johnson created this Life Tributes page to make it easy to share your memories.

Send flowers to the Johnson family.