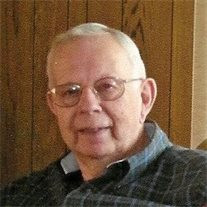 James "Jim" Kenneth LaMotte entered into eternal rest after a brief illness on Wednesday, Jan. 22 at 11:15 p.m. at the residence of his sister, Dorcas, at the age of 83. He was the husband of Doreen S. (Weitkamp) LaMotte of Windsor, to whom he married on Nov. 17, 1963, celebrating 50 years of marriage. He was born in Red Lion on March 21, 1930, and was the son of the late Frederick K. and Lida M. (Rittenhouse) LaMotte. Jim was a machine operator for the former Flinchbaugh Products for 30-plus years, retiring in 1995. He then worked part-time driving school bus for Red Lion Bus Company for 15 years. In his earlier years, Jim flew a piper cub airplane and always had an interest in aircraft even after he did not fly anymore, as well as boating, sailing, water skiing and spending time at the Susquehanna River. He had his own dance band known as the LaMotte Trio, and also one called We Three Band; Jim sang with Bob Harry in his band and played trumpet and also was a member in the Lord Charles Band where he played trumpet. He was a lifetime member of St. Paul's United Methodist Church in Red Lion, where he played in the Sunday School Orchestra for 55 years and sang in the choir. Surviving besides his wife Doreen, a daughter, Wendy LaMotte de la Rosa and husband Lance of Princeton, N.J.; a grandson, Carson LaMotte de la Rosa of Princeton, N.J.; two sisters, Dorcas LaMotte Townsley and husband Jesse of York, and Mary E. Slusher and husband Ernest of Wilmore, Ky.; numerous nieces and nephews; and his brother-in-law and sister-in-law, Ronald and Pat Weitkamp of Yoe. He was preceded in death by two sisters, Esther Field and Linda R. "Susie" LaMotte; and a niece and three nephews. There will be no viewing. Family and friends are invited to extend their condolences from 10 a.m. to 11 a.m. on Saturday, March 1, at St. Paul's United Methodist Church, 45 1st Avenue, Red Lion. Burg Funeral Home, Inc., 134 W. Broadway, Red Lion will be assisting the family with the arrangements. A Memorial Service of Honor and Praise for Jim will follow at 11 a.m. at the church. His pastor, the Rev. Lenore Hosier, will officiate. Burial will be in Red Lion Cemetery. In lieu of flowers, contributions may be offered to St. Paul's United Methodist Church, 45 1st Avenue, Red Lion, PA 17356. Jim's passion was his love of music, whether it was singing or playing his trumpet, which he was able to do up to age 78. He used his talents to entertain others through the many bands he belonged to and spiritually in his church. He will be fondly remembered for his love of music and will be greatly missed by all who knew and loved him. Online condolences may be offered at BurgFuneralHome.com

James "Jim" Kenneth LaMotte entered into eternal rest after a brief illness on Wednesday, Jan. 22 at 11:15 p.m. at the residence of his sister, Dorcas, at the age of 83. He was the husband of Doreen S. (Weitkamp) LaMotte of Windsor, to whom... View Obituary & Service Information

The family of James "Jim" K. LaMotte created this Life Tributes page to make it easy to share your memories.

James &quot;Jim&quot; Kenneth LaMotte entered into eternal rest after a...