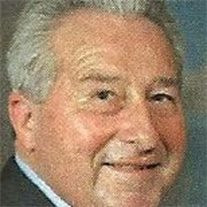 James A. Knudson, 76, entered into rest after a brief illness on Sunday, December 23, 2012, at 3:40 a.m. at the York Hospital. He was the husband of Audrey M. (Charshee) Knudson, whom he married on September 10, 1983, celebrating 29 years of marriage. He was born in Red Lion on January 31, 1936, the son of the late Charles G. and Ruth (Gembe) Knudson. James started as a mason with Curtis M. Hoffman and then had his own masonry with partner William Henry Masonry of Dallastown until retiring in 2000. He enjoyed hunting, working with his hands, cooking meals for men at the hunting camp in Potter County, loved college football and trips to Alaska and Nova Scotia. In addition to his wife Audrey of Dallastown, he is survived by a daughter, Joni M. Knudson and companion, Mr. Dana Schell of Yorkana; stepchildren, Karen Ruhnke of Reading, Cathy Pendergast and husband, Thomas Pendergast of York, John Contino and wife, Megan of Naples, Fla. Jim Contino and companion Wendy Ebersole of York and Andrea Hoffmaster of York.; five step grandchildren, Elizabeth Herrold Tammaro, James Herrold, Mary Pendergast, Peyton Massey and Anthony John Contino; sister, Ruth Marie Gibson of York,; aunt and uncle, Charles (Mike) Gembe and Mildred Gembe of York Springs; and numerous nieces and nephews. He was preceded in death by two brothers, Robert L. Knudson and Marvin E. Knudson. Viewing will be 9 to 10 a.m. Thursday at Burg Funeral Home, Inc., 134 W. Broadway, Red Lion. the service will be 10 a.m. Thursday at the funeral home with Pastor Janyce Jorgensen, of Zion Lutheran Church in York, officiating. Burial will be in Yoe Union Cemetery. In lieu of flowers, contributions may be offered to York Health Foundation, Cancer Patient Help Fund - 912 S. George St., York, PA 17403.

The family of James Knudson created this Life Tributes page to make it easy to share your memories.

James A. Knudson, 76, entered into rest after a brief illness...

Send flowers to the Knudson family.