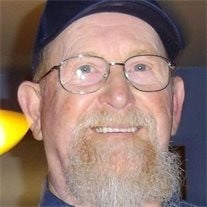 James "Red" M. Schilberz of Red Lion passed from life to Life Eternal after a lengthy illness on Monday, October 9, 2017 at 12:25 AM at York Hospital at the age of 75. He was the husband of Sharon L. (Moxley) Schilberz to whom he married on December 28, 1961, celebrating 56 years together. Red was born in Erie on May 4, 1942 and was the son of the late Franz P. and Margaret (Seib) Schilberz. He was a truck driver working for the former Warner's Mayflower and then for Overnight which later became known as United Parcel Service from where he retired after 32 years of service. He was of the Catholic Faith. Besides his loving wife, Sharon, he is survived by a son, Michael Todd Schilberz of Manchester and his children. Red leaves a brother, Robert Schilberz of Austin, PA and two sisters, Patricia Lehman of Mechanicsburg and Barbara Malehorn of Dover, several nieces and nephews and his cat, Squirt. He was preceded in death by one son James Michael Jr., who he would recall fond memories of often when talking to Jim about his past. Cremation will take place with Burg Funeral Home, Inc., 134 W. Broadway, Red Lion. A Memorial Service to Honor and Praise Red will be private and held at a later date. Interment will take place at Mt. Rose Cemetery at the convenience of the family. In lieu of flowers, contributions may be offered in memory of Red to the York County SPCA, 3159 Susquehanna Trail North, York, PA 17406. Jim was a great loving husband who loved his cat and relaxing of his front porch watching the birds fly by. He also enjoyed going to Conowingo Dam and watching the Bald Eagles. He was always willing to help his neighbors and others in need and loved gardening. A golden heart stopped beating, hardworking hands now rest. God broke our hearts to prove to us, He only takes the best. Jim was our Angel that will be greatly missed by all who knew and loved him. In our hearts forever till we meet again.

James "Red" M. Schilberz of Red Lion passed from life to Life Eternal after a lengthy illness on Monday, October 9, 2017 at 12:25 AM at York Hospital at the age of 75. He was the husband of Sharon L. (Moxley) Schilberz to whom he married on... View Obituary & Service Information

The family of James M Schilberz created this Life Tributes page to make it easy to share your memories.

Send flowers to the Schilberz family.