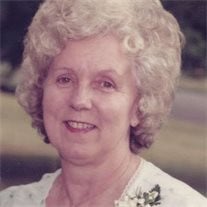 Janet Jane (Leakway) Metzel, 88, entered peacefully into the presence of her Lord on Saturday, June 27, 2015, at 7:45 p.m. as a resident of Dallastown Nursing Center. She was the wife of the late Gordon "Red" Metzel, who she married on March 27, 1948. Mrs. Metzel was born in York on May 3, 1927, and was the daughter of the late Curvin C. and Anna (Baney) Leakway. Janet was a devoted wife, mother and grandmother, having spent the majority of her married life as a "stay-at-home" housewife. Prior to and in the early years of married life, Janet was employed by T.E. Brooks for six years and McCrory's for two years in York. She was a member of the former Ebenezer United Methodist Church, Long Level. Her activities in the church included being a Sunday morning greeter, choir member, Children's Day coordinator, Sunday school & VBS teacher, along with participation on the altar flower committee. In addition to her church activities, Janet was also active in the Susquehanna Senior Center and volunteered at the Columbia Hospital Gift shop. She was an assistant Den Mother for Cub Pack 150 in East Prospect, a Girl Scout volunteer, Eastern York Band Parent Association member and enjoyed bowling at East Lincoln Lanes. Mrs. Metzel is survived by a son, Keith Metzel and wife, Lila, of Dallastown; a daughter, Trudy Metzel of Hallam; a daughter-in-law, Louise Metzel of Elizabethtown; three grandchildren, Micah Metzel of Shrewsbury, Cora Shields and husband, Matthew, of Dallastown, Matthew Metzel and wife Brittany of Elizabethtown. She is also survived by a sister, Norma Diehl and husband Donald of Dover; a sister-in-law, Lorraine Leakway of York Haven; and several nieces and nephews. She was preceded in death by a son, Timothy Metzel; two sisters, Ruth Pepo and an infant sister; in addition to two brothers, Murray "Bud" Leakway and Curvin Jay Leakway. Visitation will be from 5:30 to 6:30 p.m. Thursday, July 2, 2015, at Trinity Life Center, 14 S. Charles St., Dallastown. A service to celebrate the life of Janet Metzel will begin at 6:30 p.m. following visitation. The Rev. Roger Mentzer will officiate at the service. Burg Funeral Home, Red Lion, is handling arrangements. Interment will be at the convenience of the family in Mount Rose Cemetery, York. In lieu of flowers, memorial contributions can be made to the Bethlehem United Methodist Church Capital Campaign Fund, c/o Bethlehem U.M. Church, 109 E. Main St., Dallastown, PA 17313-2207. The family wishes to extend their deepest appreciation and thanks to the dedicated and compassionate staff of Dallastown Nursing Center, Dallastown. Our mother's final months of life were filled with smiles, caring love and acts of compassion on a constant basis. The family expresses the same appreciation and thanks to the staff and volunteers of Grane Hospice, York, for providing a dignified and comfortable journey for mom as her life came to an end on this earth. www.BurgFuneralHome.com

Janet Jane (Leakway) Metzel, 88, entered peacefully into the presence of her Lord on Saturday, June 27, 2015, at 7:45 p.m. as a resident of Dallastown Nursing Center. She was the wife of the late Gordon "Red" Metzel, who she married on March... View Obituary & Service Information

The family of Janet Jane Metzel created this Life Tributes page to make it easy to share your memories.