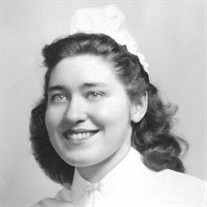 Janet Miriam Ruff, of York, passed away on March 15, 2021 at 8:27am at York Hospital at the age of 95. She was born in Airville on February 16, 1926 and was the daughter of the late Sylvester F. and Anna (Snyder) Ruff. Janet attended the former Lower Chanceford High School and earned her Bachelors of Nursing at Union Memorial Hopsital In Baltimore, MD. After a period of working as an emergency room nurse in Baltimore, she got a job at Koppers Co., Inc. in Pittsburgh and while there, attended University of Pittsburgh, earning her MPH (Master of Public Health) degree. She then enlisted in the U.S. Navy where she attained the rank of Commander. She was a trend setter for women in her era, very independent and courageous. Additionally, Janet served as a Senior Occupational Health Consultant in the Occupational and Environmental Division of the U.S. Army Environmental Hygiene at Aberdeen and Edgewood Proving Grounds in Maryland. Janet enjoyed family get togethers, bridge, reading, golf and was involved with Welcome Wagon. She was a longtime member of Pine Grove Presbyterian Church. She is survived by her nieces, Louise Stewart Kennedy of Airville, Donna Myers of Kernersville, NC, Beverly Ruff Crowl of Red Lion, and Carol Ream of Vero Beach, FL. She is also survived by her nephews, Steven Downs of Airvlle, Mark Downs of York, and Allan Englehardt of Harriman, NY, along with her great nieces and nephews. Janet was preceded in death by her six sisters, Helen Ruff, who died in childhood, Mary Englehardt, Alice Stewart, Edith Dellinger, Pauline Grove and Hazel Downs, as well as her four brothers, Samuel, Harry, Charles and Richard Ruff, her niece, Ellen Hoffman and five nephews, Harold and Robert Stewart, Donald, Robert and Neil Ruff. Cremation will take place with Burg Funeral Home, Inc., 134 W. Broadway, Red Lion. Family and friends may extend condolences on Saturday, April 3 from 10-11am at Pine Grove Presbyterian Church, 4263 Delta Rd., Airville. A memorial service of Honor and Praise for Janet will begin at 11am with her pastor, Rev. James B. Shuler, officiating. Burial will take place immediately following the service with full military rites offered by York County Veterans Honor Guard. All attending the services are asked to wear a mask and to observe the social distancing guidelines as set forth by the CDC. In lieu of flowers, contributions may be offered to Pine Grove Presbyterian Church, 4263 Delta Rd, Airville.

Janet Miriam Ruff, of York, passed away on March 15, 2021 at 8:27am at York Hospital at the age of 95. She was born in Airville on February 16, 1926 and was the daughter of the late Sylvester F. and Anna (Snyder) Ruff. Janet attended the former... View Obituary & Service Information

The family of Janet M. Ruff created this Life Tributes page to make it easy to share your memories.

Send flowers to the Ruff family.