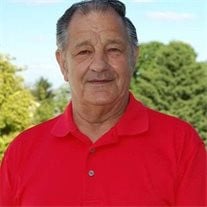 Jesse D. "Don" Knisely, Sr., formerly of Red Lion, went from life to Life Eternal, after a lengthy illness on Monday, February 26, 2018 at his son's residence in Bel Air, MD at the age of 77. He was the husband of the late Flora Mae (Woods) Knisely who entered into rest on February 8, 1993 and Elsie M. Smith Knisely who entered into rest on May 14, 2008 . Don was born in Felton on November 14, 1940 and was the son of the late Charles Edward and Esther A. (Snyder) Knisely. He was a self-employed contractor, working with his son for 44 plus years at Knisely Construction. Don was a very pride full man who enjoyed listening to Blue Grass music, tinkering around the house, boating and he even went water skiing in his sixties. He leaves to cherish his memory a son, with whom he resided, Jesse D. "Donnie" Knisely and his wife Theresa Byrum of Bel Air, MD and a daughter, Carol Sue Carico of York. He was the proud grandfather of his seven grandchildren, Kelly M. Moore and her husband Robert, Jessica Y. Temple, Ashley C. Carico, Jamey L. Williams and her husband Jason R., Kent A. Carico, Jr., Vernon B. Davis and Danielle C. Davis, and nine great grandchildren, Makayla L. Williams, Ronnie A. Williams, Olivia M. Moore, Hyatt M. Moore, Cara Davis, Adrianna Davis, Lyla Davis, Tyler D. Hommel and Benjamin L. Hommel He was one of seven siblings, Janet L. Godfrey Smith of Yorkana, Terry L. Knisely of Dallastown, Katharine R. Baker of Red Lion, Sarah I. S. Knisely of York, Charles "Junior" E. Knisely, Jr. of Felton and numerous nieces and nephews. He was preceded by his son in law, Kent A. Carico in 2001, his sister, Louise Knisely on December 11, 2005 and his brother in law, Terry C. Smith, Sr. in 2016. Viewing will be on Monday, March 5, 2018 from 10 to 11 am at Burg Funeral Home, Inc., 134 W. Broadway, Red Lion. A Service of Honor and Praise for Don will begin at 11 am at the funeral home with Rev. Steven A. Schmuck, pastor of Red Lion Bible Church officiating. Burial will follow the service at Bethel Cemetery. In lieu of flowers, contributions may be offered to the Cancer Patient Help Fund, York Health Foundation, 50 N. Duke St., Second Floor, York, PA 17401. Don was known as "Pappy Day Care" to the dog, Coco, who was very protective over his Pappy and loved being with him. He loved the Lord and kept him in his heart. "Yea, though I walk through the valley of the shadow of death, I will fear no evil. For Thou art with me."

Jesse D. "Don" Knisely, Sr., formerly of Red Lion, went from life to Life Eternal, after a lengthy illness on Monday, February 26, 2018 at his son's residence in Bel Air, MD at the age of 77. He was the husband of the late Flora Mae (Woods)... View Obituary & Service Information

The family of Jesse D. "Don" Knisely, Sr created this Life Tributes page to make it easy to share your memories.