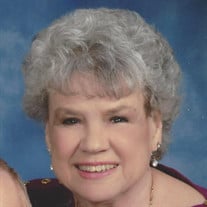 Joan L. (Shelley) Reichard, formerly of Red Lion, left her earthly life to begin her Eternal Life with her Lord and Savior on Thursday, July 1, 2021, at 1:32 am from the home at SpiriTrust Lutheran, The Village at Sprenkle Drive in York, at the age of 82. She was the wife of the late Robert E. “Bob” Reichard, with whom she celebrated 54 years of marriage prior to his passing on June 18, 2017. She was born in Red Lion on April 1, 1939 and was the daughter of the late Luther O. and Edna I. (Anderson) Shelley. She was a graduate of Red Lion High School, Class of 1957. Joan was a homemaker and a hairdresser, working with her sister-in-law for a few years. She was also a babysitter for many years. She loved watching Law and Order, cooking shows and QVC on TV. Joan enjoyed going to the beach, spending time in the mountains, camping and spending time with her family. She was a longtime member of Chapel Church, a United Methodist Congregation, in Red Lion. Joan and Bob had two sons, Scott E. Reichard and his wife Amy of Airville, and Craig A. Reichard of Felton and his friend Linda Saylor of Mt. Wolf. She was the loving grandmother of Nicole Green and husband Taylor, Adam Reichard and wife Pamela, Jaclyn Holland and husband Zachary, Seth Reichard and Dylan Reichard and wife Aubree. She was also a great grandmother of five great grandchildren with a great grandson on the way. She also leaves her sister, Donna Ritz and her husband Lance of Hellam along with her nieces and numerous friends. There will be no viewing. Family and friends may extend their condolences on Wednesday, July 14th, from 6-7 pm at Burg Funeral Home, Inc., 134 W. Broadway, Red Lion. A Memorial Service to Honor and Praise Joan’s life will begin at 7 pm at the funeral home, with her pastor, Rev. Joshua S. Wargo officiating. Burial will be private and at the convenience of the family.

Joan L. (Shelley) Reichard, formerly of Red Lion, left her earthly life to begin her Eternal Life with her Lord and Savior on Thursday, July 1, 2021, at 1:32 am from the home at SpiriTrust Lutheran, The Village at Sprenkle Drive in York, at... View Obituary & Service Information

The family of Joan L. (Shelley) Reichard created this Life Tributes page to make it easy to share your memories.

Send flowers to the Reichard family.