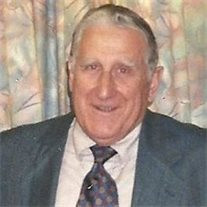 FELTON John H. Bartholme, 88, entered into eternal rest at 12:40 a.m. Friday, June 26, 2015, at Barbara J. Egan Skilled Nursing and Rehabilitation Center in Shrewsbury. He was the husband of L. Laura (Ingram) Bartholme. He was born in Towson, Md., on August 5, 1926, and was the son of the late Herman Joseph and Hattie (Binder) Bartholme. John did farming in his earlier years and then was a very good self-employed masonry contractor. His business was known as J.H. Bartholme, located in Maryland. He retired from masonry work after many years of service and then he and Laura worked at several antique stands before opening their own business, Old Town Antiques, on Main Street in Shrewsbury, which they owned and operated for seven years. In addition to his wife, Laura, John is survived by a daughter, Patricia L. Ewell of Felton; three sons, J. Thomas Bartholme of Martinsburg, Va., W. Christopher Bartholme of New Freedom, and Paul Joseph Bartholme of Felton; a son-in-law, Jim Ewell of Felton; 13 grandchildren; and seven great-grandchildren with another due in August. He was preceded in death by a grandson, Joseph Kurnik, who entered into rest on January 24, 2013; a brother, Herman Bartholme; and a sister, Louise Scarberry. There will be no viewing. Family and friends may extend their condolences from 1 to 2 p.m. on Tuesday, June 30, at Burg Funeral Home, Inc., 134 W. Broadway, Red Lion. A Service of Honor and Praise for John will begin at 2 p.m. at the funeral home. Burial will be at Dallastown Union Cemetery. In lieu of flowers, contributions may be offered to St. Jude Medical, Inc., One St. Jude Medical Drive, St. Paul, MN 55117-9983. John and Laura where married on September 4, 1949, celebrating 65 wonderful years together. He is remembered as being a very kind man with a great sense of humor who was always putting the needs of others before his own. He never complained about anything. His family was always paramount to anything else in his life. He will be greatly missed by all who knew and loved him. www.BurgFuneralHome.com

The family of John H. Bartholme created this Life Tributes page to make it easy to share your memories.

Send flowers to the Bartholme family.