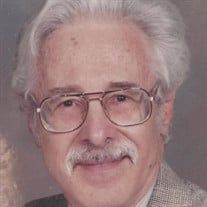 John R. “Russ” Hearton, formerly of Red Lion, went home to his Lord and Savior on Saturday, May 2, 2020, at 2:18 am at Manor Care South, at the age of 88. He was the loving husband of the late Jewel E. (Gipe) Hearton, with whom he shared 40 years of marriage, prior to her passing on March 15, 2016. He was born in Pittsburgh, on February 24, 1932, and was the son of the late John M. and Lillian (Stewart) Hearton. He graduated from the Williamsport Area High School and then went on to graduate from Penn State with a degree in education, and he earned a masters of music degree from Boston Conservatory of Music. He taught school for many years at the Loyalsock Township School District in Montoursville, PA, prior to his retirement. After moving to Red Lion, he went to St. Paul’s United Methodist Church where he was in charge of the orchestra. Russ and Jewel played in the Felton Band and the Emigsville Band. While living in Williamsport, they would go to various nursing homes in the area and play music for the residents. He was talented in being able to play many instruments, and even taught his children to play instruments; but his favorite was the trombone and he enjoyed playing the guitar too. John loved to fish with his brothers and spend time with his family. He was a United States Navy Veteran serving during the start of the Vietnam War. He was a member of Grace Baptist Church in York. Russ leaves his two daughters, Suzanne J. Giovinazzo of Waterloo, NY, and Margaret “Maggie” Hearton of Pennyan, NY, two sons, Douglas Hearton of Canandaigua, NY and Russell Hearton of Fulton, NY. Two step daughters, Deborah S. Gladwin and her husband George of Red Lion, and Diane J Mundy of Stewartstown. He was the grandfather of thirteen grandchildren, and numerous great grandchildren and great great grandchildren. John has a sister, Sylvia Hearton of Williamsport, and two brothers, Thomas Hearton of OK and Steve Hearton of Myrtle Beach, along with nieces and nephews. He was preceded in death by three stepsons, Lonny Denton, Michael Denton and Steven Denton and a step great grandchild, along with his beloved dog, Jillie. There will be no public services, due to the current health risks. Private services will be held for the family and burial will be in Twin Hills Memorial Park in Muncy, PA. His pastor, Steven J. Warner will officiate. Burg Funeral Home, Inc., 134 W. Broadway, Red Lion, will be assisting with the arrangements. John was an awesome person, a loving husband and wonderful father, grandfather and friend to everyone he met. He will be greatly missed by many who knew and loved him. In lieu of flowers, contributions in his memory, may be offered to the York County SPCA (for his love of animals), 3159 Susquehanna Trail North, York, PA 17406 or to the York County Veterans Honor Guard, c/o Harold Redding, PO Box 713, Mt. Wolf, PA 17347.

The family of John Russell Hearton created this Life Tributes page to make it easy to share your memories.

Send flowers to the Hearton family.