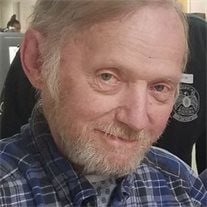 John F. "Shorty" Eckert, of Windsor, entered into rest on Tuesday, March 27, 2018 surrounded by his family at 8:35 pm at his residence at the age of 77. He was the husband of the late Barbara A. (Riddle) Eckert who entered into rest on November 9, 2010 and is the companion of Debra K. Crone of Windsor. He was born in Windsor, on September 26, 1940 and was the son of the late George R. and Lorene (Kramer) Eckert. John worked on a farm and in the family business, Eckert Salvage Yard until 1999. He was a self-employed tow truck driver of Eckert Towing and he worked at Standard Concrete retiring in 1997. Though he never really stopped working, he was always busy doing something. He enjoyed camping, working on cars, spoiling his grandchildren and smoking cigars. He was a long time member of the Red Lion Bible Church. John is the father of Debbie A. Smith and her husband Kenneth of Windsor, Tammie S. Brown and her husband Brian of Windsor and Mark A. Crone and his significant other Rebecca Lenhart of Thomasville. He was the grandfather to sixteen grandchildren; Jessica Myers, John F. Eckert III, Shane Eckert, Amanda Smith, Justin Eckert, Ryan Brown, Chad Brown, Sierra Crone, Amber Eckert, Kristina Brown, Michael Lenhart, Joshua Lenhart, Samantha Brown, Tyler Wilson, Mark "deuce" Crone II, and Izabella Crone; and fourteen great grandchildren; Kadence Faith Eckert, John F. Eckert IV, Zachary Smith, Hayden Myers, Gavin Alexander Michael Eckert, Jaiden Curtis, Jackson Austin Lee Eckert, Matthew Barnhart, Leon Scott Zimmerman-Brown, April Rayne Heidlebaugh, Shane Eckert II, Adrian "Jake" Eckert, Lukas Brown, Alivia Eckert, Allie Rose Hall, Kinley Grace Eckert and the brother of Linda Eaton of Windsor. He has several nieces and nephews. He was preceded in death by his son, John Eckert, Jr in 2004 and his grandson, Joshua Smith in 2005. Viewings will be on Monday, April 2nd from 6-8 pm and Tuesday, from 9-10 am at Burg Funeral Home, Inc., 134 W. Broadway, Red Lion. A Service of Honor and Praise for Shorty will begin at 10 am at the funeral home, with his pastor, Rev. Steven A. Schmuck officiating. Burial will be at Windsor Cemetery. In lieu of flowers, contributions may be offered to: Red Lion Bible Church, 105 Springvale Road, Red Lion, PA 17356. John was a good father and friend to many. He always taught his family right from wrong and to be strong in what you believe in. Though he is with God now, they will carry on in his place and he will be in their hearts forever.

John F. "Shorty" Eckert, of Windsor, entered into rest on Tuesday, March 27, 2018 surrounded by his family at 8:35 pm at his residence at the age of 77. He was the husband of the late Barbara A. (Riddle) Eckert who entered into rest on November... View Obituary & Service Information

The family of John F. "Shorty" Eckert created this Life Tributes page to make it easy to share your memories.