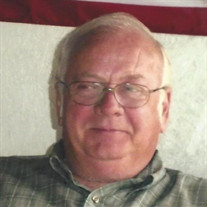 John F. Warner, Sr., of Glen Rock, went home to his Lord and Savior, after a lengthy illness, on Saturday, April 13, 2019, surrounded by his loving family, at 11:15 am at his residence at the age of 73. He was the loving husband of Diane R. (Smith) Warner of Glen Rock, to whom he married on May 23, 1964, celebrating 54 years of marriage. He was born in Felton, on April 15, 1945, and was the son of the late Elwood and Mary E. (Keener) Warner. John was the world’s greatest carpenter. During his years, he had built many beautiful homes. He was very meticulous and put a lot of pride into making sure things were done right. He and Diane would go out and find old field stone to use on building projects. He then would fit every stone together, like a puzzle to make a complete project. He worked many years for the Carpenters Local Union and then with Washington and Dowling Contractor’s in York, retiring in 2015, after several years of service. He was a lifetime member of the Yorkanna Game and Gunning Club. He enjoyed hunting and fishing, especially with his best friend and brother in law, William “Billy” H. Knaub, Sr. John loved to eat Diane's homemade pies and cooking, and spending quality time with his family was very important to him. Besides his wife, he leaves behind four children, John (Weasel) Warner, Jr. of Brogue, Kelly Jo Warner of Red Lion, Brian A. and Betty Warner (with whom John and Diane resided) of Glen Rock, and Deborah and Jerry Nalls of Craley. He was the grandfather to: Kiersty McCauslin, Hunter Warner, Levi Warner, all of Red Lion and great grandfather to Evan McCauslin of Red Lion. John has three sisters, Edna Rineholt, Shirley Harrison, both of Windsor, and Darlene “Babe” Warner of York, and a brother, Robert Warner of Windsor, along with numerous nieces and nephews. He was preceded in death by a brother, Eugene Warner. Cremation will take place with Burg Funeral Home, Inc., 134 W. Broadway, Red Lion. A service to celebrate John’s life will be held on, Sunday, May 19th, from noon to 5 pm at Yorkanna Game and Gunning Club, 468 Smyser Road, Yorkana, PA 17406. Burial will be private and at the convenience of the family. In lieu of flowers, contributions in John’s memory, may be offered to: Yorkanna Game and Gunning Club, (please use the address above.) or to the American Diabetes Association, PO Box 15829, Arlington, VA 22215. Perhaps my time seemed all to brief, don’t lengthen it now with undue grief. Lift up your heart and share with me, God wanted me now, He set me free. I’m home now, fishing with Billy in the golden lakes, waiting with open arms, on that day that we all meet again. www.BurgFuneralHome.com

John F. Warner, Sr., of Glen Rock, went home to his Lord and Savior, after a lengthy illness, on Saturday, April 13, 2019, surrounded by his loving family, at 11:15 am at his residence at the age of 73. He was the loving husband of Diane R.... View Obituary & Service Information

The family of John F. Warner Sr. created this Life Tributes page to make it easy to share your memories.

Send flowers to the Warner family.