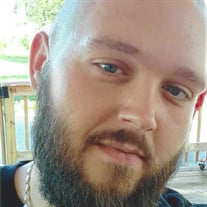 Jordan Philip Redmond, of Yorkana, received his angel wings on December 31, 2020, at 7:08 am at his residence at the age of 29. He was the loving son of Philip F. Redmond II of Yorkana and Betty J. (Manahan) Warner and stepfather Brian Warner of Glen Rock. He was born in York on November 1, 1991 and graduated from Dallastown High School Class of 2010. He worked with his friend at Gordon Home Improvements, remodeling homes. He was a member of the Sons of Cells MC. Jordan loved his motorcycle, scratch off tickets, camping, boating, sitting by a campfire and spending quality time with his family and friends. His father, Philip was his best friend. Besides his parents, Jordan has a fiance’, Alicia M. Leeper of Windsor, and her son, Alex Lawrence of Windsor, three brothers, Hunter Warner and Levi Warner, both of Red Lion and Ian Ashenfelder (Cyndi) of Dover. He also leaves several aunts and uncles: Aunt Carrie Manahan and Uncle Billy of Delta, Aunt Melvina Hutton and Uncle Kevin of Yoe, Aunt Teressa Manahan and Uncle Terry of Delta, Uncle Robert Manahan of Airville, Uncle Todd Redmond of York, Aunt Bonnie Cordwell and Uncle Tom of Brogue as well as numerous nieces, nephews and cousins. Viewing for Jordan will be on Monday, January 11, 2021, from 5-7 pm at Burg Funeral Home, Inc., 134 W. Broadway, Red Lion. A Service of Honor and Praise will begin at 7 pm at the funeral home with Rev. David D. Tietje, pastor of St. John’s United Church of Christ in Red Lion, officiating. Cremation will follow the service and burial will be private and at the convenience of the family. If attending the service, please wear a mask and observe the social distancing guidelines. Please be respectful of those waiting to share their condolences with the family and be mindful of those arriving behind you, allowing all time to grieve. In lieu of flowers, contributions may be offered to: St. Jude’s Children’s Hospital, Memorial and Honor Program, 501 St. Jude Place, Memphis, TN 38105.

Jordan Philip Redmond, of Yorkana, received his angel wings on December 31, 2020, at 7:08 am at his residence at the age of 29. He was the loving son of Philip F. Redmond II of Yorkana and Betty J. (Manahan) Warner and stepfather Brian Warner... View Obituary & Service Information

The family of Jordan Philip Redmond created this Life Tributes page to make it easy to share your memories.

Jordan Philip Redmond, of Yorkana, received his angel wings on...

Send flowers to the Redmond family.