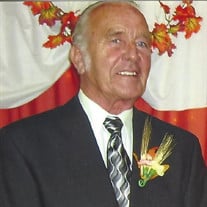 Karl E. Nishwitz, formerly of Spring Grove, entered into God’s care on Wednesday, November 7, 2018, at 7 pm at SpiriTrust Lutheran Home in York, at the age of 84. He was the companion of Shelby Havenstrite of East Berlin, and the former husband of the late Nancy M. (Wallace) Nishwitz who entered into rest on February 8, 2018. Karl was born in Detroit, MI on December 2, 1933 and was the son of the late Theodore and Gladys (Rottler) Nishwitz. He worked for more than twenty years at Karl’s Auto Body, and recently was the owner and operator of West York Motors for the last twenty years. He was very involved with Drag Racing for more than fifty years. His racing career began in 1953 at the former York US 30 and York Airport. He also raced at Cecil County and Maple Grove, and Karl was known for winning, “Top Dog” in 1963-1964. He worked for NHRA for twenty years and Indy for nineteen years. He was later inducted into the Drag Racing Hall of Fame in 2013, and was a member of the Club Motor Menders. He leaves two daughters to cherish his memory, Lynette R. Ehrhart and husband Darryl of York, and Julie E. Nishwitz of Dover. Karl was a loving grandfather to Nicole Gohn of Dallastown and Jacob and his wife Leah Nishwitz of Florida. He has four great grandchildren, Kayla Patterson of Dallastown and Krista Gohn of Red Lion, Josie Nishwitz and Lydia Nishwitz both of Ocala, FL., along with four great great grandchildren, Isabella Gohn, Jasper Gohn, Kole Patterson and Mia Williams and numerous nieces and nephews. He was preceded in death by two sons, Jack D. Nishwitz in August of 2015 and Bradley J. Nishwitz along with a sister. A viewing for Karl will be on Thursday, November 15th from 6-7 pm at Burg Funeral Home, Inc., 134 W. Broadway, Red Lion. A Service of Honor and Praise for Karl will begin at 7 pm at the funeral home with Rev. Steven A. Schmuck, pastor of Red Lion Bible Church officiating. Burial will take place at Craley Cemetery at the convenience of the family. In lieu of flowers, contributions in Karl’s memory may be offered to: Red Lion Christian School, 105 Springvale Road, Red Lion, PA 17356.

Karl E. Nishwitz, formerly of Spring Grove, entered into God&#8217;s care on Wednesday, November 7, 2018, at 7 pm at SpiriTrust Lutheran Home in York, at the age of 84. He was the companion of Shelby Havenstrite of East Berlin, and the former... View Obituary & Service Information

The family of Karl E. Nishwitz created this Life Tributes page to make it easy to share your memories.

Send flowers to the Nishwitz family.