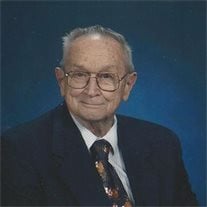 Kenneth "Ken" L. Stein, of York, went from life to Life Eternal on Monday, December 18, 2017 at 12:42 pm at Pleasant Acres Nursing Home at the age of 95. He was the husband of the late Janet I. (Keiser) Stein who entered into rest on October 18, 1988. He was born in Windsor Township on May 1, 1922 and was the son of the late J. Thomas and Mary A. (Brenneman) Stein. Ken was a farmer and worked at New York Wire Cloth. He then worked for the former York Home Furniture, Grinnel in Columbia and was a tow motor operator at the former Agway, retiring in 1986. He was not one to sit around so he then worked part time at York Tool Warehouse. Ken was also the former owner and operator of Glades Auction and traveled all throughout York County selling W I Rawleigh products for many years. He was a longtime and active member of the Christ United Methodist Church in Yorkana where he taught Sunday School for many years and was involved in the Young Men's Group of the church. He was a member of AARP and the Philadelphia Athletics Association. He leaves his six children, Paul E. Stein and his wife Rachael of York, Velma A. Stein of Port Richie, FL, Nelson L Stein and his wife Gail of Red Lion, John G. E. Stein and his wife Theresa of York, Joseph L. Stein of Arcadia, FL and Doris M. Koontz of York. He was the loving grandfather of ten grandchildren; Paul Stein Jr., Michele Lam, Benjamin Stein, Jessica Frantz, Julie Rittenhouse, Steven Koontz, Tracy Tomes, Justin Koontz, Rebecca Kauffman, and Kevin Koontz. Along with the grandchildren Kenneth also had twenty –two great grandchildren; Brooke, Ashlyn, Sarah, Jacob, Ethan, Caitlyn, Jalen, Joela, Jenah, Clayton, Logan, Alison, April, Isaak, Isabella, Iliza, Leia, Kaylee, Sophia, Noah, Kolby, and Kalista; as well as three step great grandchildren, Keshia, Dustin, and Danielle. He has two brothers, Lawrence E. Stein of Yoe and Marvin L. Stein of Gettysburg. Ken was preceded by his two brothers, LaMar C. Stein and Glenn E. Stein. Viewing will be on Friday, December 22nd, from 9-11 am at Burg Funeral Home, Inc., 134 W. Broadway, Red Lion. A Service of Honor and Praise will be on Friday at 11 am at the funeral home with his pastor, Rev. Jason Guillaume officiating. Burial will follow in Freysville Zion EV Cemetery. In Lieu of flowers, contributions may be offered to: Christ United Methodist Church, 5 Main Street, Yorkana, PA 17406.

Kenneth "Ken" L. Stein, of York, went from life to Life Eternal on Monday, December 18, 2017 at 12:42 pm at Pleasant Acres Nursing Home at the age of 95. He was the husband of the late Janet I. (Keiser) Stein who entered into rest on October... View Obituary & Service Information

The family of Kenneth L. "Ken" Stein created this Life Tributes page to make it easy to share your memories.