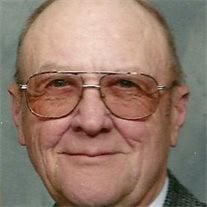 Kenneth "Ken" L. Ness entered into eternal rest after a brief illness on Tuesday, June 10, 2014, at 4:35 p.m. at York Hospital at the age of 85 . He was the husband of Betty J. (Anderson) Ness of Red Lion. Ken was born in Freysville on April 12, 1929, and was the son of the late Samuel M. and Mary V. (Campbell) Ness. Ken worked at General Motors Service in parts operation, retiring after 25 1/2 years as District Manager in Northern Virginia. In his earlier years, he worked at the former A & P Grocery and at New Era Die Company in Red Lion; Jacobs Lumber Company in Windsor and was also the parts manager at the former Sterner Chevrolet, Inc. in Red Lion. He was a graduate of Red Lion High School Class of 1947 and continued his education attending the York Junior College and John Hopkins University in Baltimore, Md. He was a member of the Masonic Lodge #649 Free & Accepted Mason in Red Lion where he earned his 50-year membership in June, 2013; Harrisburg Consistory Ancient Accepted Scottish Rite; Zembo Temple Shrine in Harrisburg; American Legion Post #543 in Red Lion; Laurel Fire Company #1 in Windsor and Yoe Fire & Rescue in Yoe, where he was active with the fire police in both companies but he held the title of Lieutenant with the Yoe Fire Company; Pennsylvania Sherriff's Association; and a U.S. Army Veteran serving during the Korean War as SGT 1st Class. Survivors include a son, Kenneth L. Ness, Jr. (Maria) of Finksburg, Md.; a daughter, Donna J. (Ness) Straley (James) of Manchester, Md.; four grandchildren, Tina Straley Gentle (Lance), Kim Straley Freeland (Chuck), Suzanne Straley Goldstein (Marc) and Pamela Ness Meushaw (Steve), all of Maryland; six step grandchildren; 19 great-grandchildren; four step children, Wanda Turner (Wayne), Diann Berger (Donald), Brenda McClanahan, all of Virginia, and Roger Dowdy (Debbie) of Colorado; numerous nieces, nephews and cousins. He was preceded in death by two sisters, Mary Ness Poff and Clara Ness Gilbert. Viewings will be held Monday, June 16 from 6 to 8 p.m., with Masonic Rites by the Red Lion Masonic Lodge #649 F & A M to begin at 7:45 p.m., and Tuesday from 10 to 11 a.m. at Burg Funeral Home, Inc., 134 W. Broadway, Red Lion. A Service of Honor and Praise for Ken will begin at 11 a.m. on Tuesday at the funeral home. Pastor Harold "Butch" Snyder of Emmanuel UM Church in Windsor will officiate. Burial will be in Freysville Zion UM Cemetery, with full military rites by the York County Veterans Honor Guard. In lieu of flowers, contributions may be offered to: Red Lion Masonic Lodge #649 F&AM, 23 W. High St., Red Lion, PA 17356; or to Laurel Fire Company #1, 94 Schoolhouse Lane, Windsor, PA 17366; or to Yoe Fire Company, P.O. Box 249, Yoe, PA 17313. Ken and Betty married on August 10, 1985, celebrating 28 years together. He was a wonderful Father and Grandfather. Ken was a member of the Amateur Radio Club in Felton where he received many certificates for HAM Radio contacts over the years. He loved Hunting and Camping and he and Betty have camped in 48 of the 50 states over the years. He was an avid NASCAR Race Fan of Dale Earnhardt #3. He will be greatly missed by all who knew and loved him. Online condolences may be offered at www.BurgFuneralHome.com

Kenneth "Ken" L. Ness entered into eternal rest after a brief illness on Tuesday, June 10, 2014, at 4:35 p.m. at York Hospital at the age of 85 . He was the husband of Betty J. (Anderson) Ness of Red Lion. Ken was born in Freysville on April... View Obituary & Service Information

The family of Kenneth L. Ness created this Life Tributes page to make it easy to share your memories.