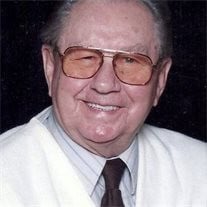 Kenneth D. Thomas, 95, formerly of York, entered into rest after a lengthy illness on Saturday, July 14, 2012, at 9:25 a.m. at Manor Care Dallastown. He was the husband of Elsie M. (Graham) Thomas, who entered into rest on February 14, 2007. Born in Lower Windsor Twp. on June 11, 1917, he was the son of the late Oscar J. and Naomi E. (Dellinger) Thomas. Ken worked at the former AMF where he was a supervisor retiring in 1980, after many years of service. He was a member of the Riverview F&AM Lodge #503 in Wrightsville, Harrisburg Consistory for 50+ years and he was a longtime member of Canadochly Evangelical Reformed Church and its Sunday School Class. Surviving are a daughter, Maxine E. Strausbaugh of York and husband Lester; two sons, Ronald E. Thomas of Wrightsville and wife, Flo and Lowell Thomas of York and wife, Kathleen; 12 grandchildren; numerous great-grandchildren and several great-great-grandchildren; one sisters, Evelyn Arnold of York; and many nieces and nephews. He was preceded in death by two brothers, Dale and Karl Thomas; and a sister, Dorothy Sechrist. The viewing will be 9 to 10 a.m. Wednesday at Canadochly Evangelical Reformed Church, 4845 E. Prospect Road, York. Burg Funeral Home, Inc., 134 W. Broadway, Red Lion, will be handling the arrangements. The service will follow at 10 a.m. Wednesday at the church, with his pastor, Rev. William H. Baral, officiating. Burial will be in Canadochly Cemetery. In lieu of flowers, contributions may be offered to Canadochly Evangelical Reformed Church, 4845 E. Prospect Road, York, PA 17406. Online condolences may be extended at www.BurgFuneralHome.com

The family of Kenneth Thomas created this Life Tributes page to make it easy to share your memories.

Kenneth D. Thomas, 95, formerly of York, entered into rest after...

Send flowers to the Thomas family.