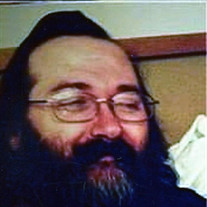 Kevin E. Forbes, of Red Lion, entered into rest at Wellspan York Hospital on Tuesday, January 4, 2022 at 5:43 PM at the age of 57. Kevin was the husband of Gail F. (Johnson) Forbes, to whom he married on September 19, 1994, sharing 27 years of marriage. Kevin was the son of the late Donald Eugene Forbes and Betty L. Noyes, of Hanover. Kevin was a machinist and was always fiddling in his shed. He was a jokester and was known for being a “big kid.” Kevin loved spending time outside, working on vehicles and tinkering around with anything that had a motor. While spending time outside, he enjoyed tending to his chickens and most importantly, loved being with Sassy, his shih tzu. Kevin will be fondly remembered as being a loving husband to his beloved Gail or as he called her, “Hun”, a doting father and a huge Dale Earnhardt, Sr. fan. He truly will be missed. Besides his wife and mother, Kevin leaves behind his daughters, Angela F. Watkins and companion, Richard Lockamy, of West York, Crystal G. Tompkins, of York, his sons, Dereck I. Watkins and fiancé, Ashley Brownawell, of Red Lion, and Richard L. Watkins, Jr., of Yoe. He also leaves his fourteen grandchildren, Savannah Q. Watkins, Mia J. Watkins, Kiaunna G. Watkins, Malachi J. Rineholt, Isabella R. Rineholt, Neveah A. Rineholt, Shyla R. Watkins, Richard L. Watkins, III., Gatlin Watkins, Lawson Watkins, Kylee N. Lockamy, Katie R. Lockamy, Cohen J. Lockamy and Cayden R. Lockamy. He also leaves his sisters Verdella Forbes, of Thomasville, Charlene Daugherty, of Thomasville, Betty Jane Angiorlis and husband, Aaron, of Dover along with numerous other family members. He was preceded in death by his sister, Kimberly Forbes. A viewing for Kevin will take place on Thursday, January 13, 2022 from 6-8 PM and Friday, January 14, 2022 from 11-12 PM at Burg Funeral Home, Inc., 134 W. Broadway, Red Lion. A service of Honor and Praise for Kevin will begin at 12 PM at the funeral home with Rev. David D. Tietje, of St. John’s United Church of Christ in Red Lion, officiating. Burial will take place at Susquehanna Memorial Gardens following the service. Contributions in memory of Kevin may be offered to The York County SPCA, 3159 N. Susquehanna Trail, York, PA 17406 or to The COPD Foundation, 3300 Ponce De Leon Blvd, Miami, FL 33134.

The family of Kevin Eugene Forbes created this Life Tributes page to make it easy to share your memories.

Send flowers to the Forbes family.