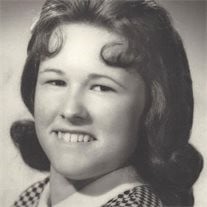 LaVonda "Wandie" M. (Reisinger) Miller, of York, went from life to Life Eternal after a brief illness on Wednesday, October 18, 2017 at 9:47 pm at York Hospital at the age of 70. She was the wife of the late Clyde A. Miller, Sr. who entered into rest on November 1, 2005. Wandie was born in Long Level on January 29, 1947 and was the daughter of the late Rev. Belere R. and Miriam C. (Wallace) Reisinger. She was the payroll clerk at Accounting Services of York for the past 22 years. She was a former Girl Scout Leader for many years, she enjoyed babysitting, needle craft and knitting. She was a member of the former Prayer Mission Church. She leaves to cherish her memory, three sons, Clyde A. Miller, Jr. and his wife Leanne of York, Joel C. Miller of Lampeter, Lancaster County, and Darby R. Miller and his wife Sally of York. A daughter, Claudette A. Hess of York. She was the loving grandmother of thirteen grandchildren, Ronald Heller, Jr., Cody Miller, Clyde Miller, III, Josh Miller, David Heller, Drue Hess, Jacob Miller, Nate Miller, Gage Hess, Tyler Miller, Austin Miller, Paige Miller and Brandon Miller, along with two great grandchildren, Ronald Heller, III and Elexus Heller and a third great grandchild, Baby Miller on the way, due in March. A sister, Linda Williams and her husband Darrell of Weiglestown, and several nieces and nephews. Viewings will be on Tuesday, October 24th from 7-9 pm and Wednesday, October 25th from 9:30 to 10:30 am at Burg Funeral Home, Inc., 134 W. Broadway, Red Lion. A Service of Honor and Praise for Wandie will begin on Wednesday at 10:30 am at the funeral home, with Rev. David D. Tietje, pastor of St. John's United Church of Christ officiating. Burial will follow at Susquehanna Memorial Gardens. In lieu of flowers, contributions may be offered to: Development & Alumni Relations, MC HS20, 1249 Coca Ave, Suite 115, PO Box 852, Hershey, PA 17033-0852.

LaVonda "Wandie" M. (Reisinger) Miller, of York, went from life to Life Eternal after a brief illness on Wednesday, October 18, 2017 at 9:47 pm at York Hospital at the age of 70. She was the wife of the late Clyde A. Miller, Sr. who entered... View Obituary & Service Information

The family of LaVonda M. Miller created this Life Tributes page to make it easy to share your memories.