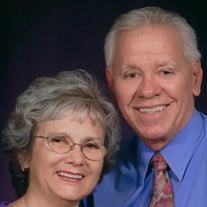 Larry L. Ambuel, of Glen Rock, passed peacefully from this life to eternal life on Friday, February 25, 2022, at 7:53 pm at Wellspan York Hospital, at the age of 84. He was the husband of Margaret J. (Barber) Ambuel, of Glen Rock, to whom he married on October 21, 1960, celebrating 61 years of marriage. He was born in Alhambra, IL on August 26, 1937, and was the son of the late John A. and Merle (Gullick) Ambuel. After high school, Larry received a degree in Liberal Arts. He was a United States Air Force Veteran. Larry worked at the National Security Agency as a Signals Analyst and was a Ham Radio operator for Disaster Relief and Search and Rescue. He was a member of Stewartstown Baptist Church for eight years, where he served as deacon and taught Sunday School. Larry and Margaret have three children, Randy L. Ambuel and wife Nicole M. of Glen Rock, Deborah L. Grauel and husband Jim L., Jr. of Mechanicsburg, and Betty A. Lezama of Glen Rock. He was the grandfather of six grandchildren. Larry was preceded in death by his son-in-law, James W. Lezama and five siblings. Viewing will be on Monday, from 9-11 am at Stewartstown Baptist Church, 18631 Five Forks Road, Stewartstown. Immediately following will be the Service of Honor for Larry beginning at 11 am at the church, with his pastor, Rev. Tim Parker, officiating. Burial will take place at Indiantown Gap National Cemetery with full military honors, on Tuesday, March 8th at 12.30. All wishing to attend the committal service should meet at the cemetery, (Indiantown Gap Road, Annville, PA) by 12:15 pm. Burg Funeral Home, Inc., 134 W. Broadway, Red Lion is assisting the family with the arrangements. In lieu of flowers, contributions in memory of Larry may be offered to: The Central York Blood Bank, by donating blood to help others in need. Online condolences may be offered at: BurgFuneralHome.com

The family of Larry L. Ambuel created this Life Tributes page to make it easy to share your memories.

Send flowers to the Ambuel family.