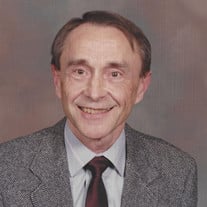 Larry E. Smith, formerly of Dallastown, entered into God’s care on Thursday, November 15, 2018 at The Brunswick at Longstown at the age of 76. He was the husband of the late Myrna L. (Gohn) Smith who entered into rest on October 2, 1999, with whom they celebrated 32 years of marriage. He was born in Red Lion on January 4, 1942 and was the son of the late Luther E. and Grace A. (McDonald) Smith. Larry graduated from Red Lion High School, Class of 1959 and went on to earn a BS degree in Business Administration from Elizabethtown College, graduating in the Class of 1963. Following his six years as a bank manager, Larry went on to be an accountant working on the corporate level and handling payroll for the former York International, retiring in 1997. Larry was an avid tennis player, coin collector, and skilled musician. He was a longtime member of the Red Lion Felton Band and sang with the Equine Singers. Larry was also a member of St. Paul’s United Methodist Church in Red Lion since 1967. He leaves his daughter, Julie A. Smith of York Haven and two grandchildren, Clara Ort and Elizabeth (Lizzy) Ort. He was preceded in death by a sister, Phyllis Parlett, and a brother in law, Curtis Parlett. A Service of Honor and Praise for Larry will be on Wednesday, November 21st, at 11 am, with his pastor, Rev. Timothy A. Funk officiating, at Burg Funeral Home, Inc., 134 W. Broadway, Red Lion. Viewing will be from 10 – 11 am, Wed., at the funeral home. Burial will take place in Red Lion Cemetery. In lieu of flowers, contributions may be offered to: St. Paul’s UM Church, 45 First Ave., Red Lion, PA 17356 or to the American Diabetes Association, PO Box 15829, Arlington, VA 22215.

Larry E. Smith, formerly of Dallastown, entered into God&#8217;s care on Thursday, November 15, 2018 at The Brunswick at Longstown at the age of 76. He was the husband of the late Myrna L. (Gohn) Smith who entered into rest on October 2, 1999,... View Obituary & Service Information

The family of Larry E. Smith created this Life Tributes page to make it easy to share your memories.