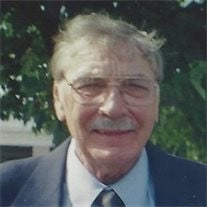 Larry T. Wallace formerly of York, went from life to Life Eternal on Thursday, September 14th at 6:17 am at St. Anne's Retirement Community in Columbia at the age of 80. He was the son of the late Grant and Minnie (Zarfos) Wallace. He was born in Craley on September 3, 1937. After graduating from Red Lion High School, he served in the United States Army spending time in Japan. While in the military he was a repairman in radio communications which he used later in life. He was a Certified Tech with the FCC, obtaining a Second Class radio license. He went to Cleveland Electronics Technical School. He worked as a computer tech at the former GTE which is now known as Verizon for 36 years before retiring. Larry taught electronics at York Vo-Tech and York Technical Institute and worked at Graham Recycling for 5 years. Larry leaves his two daughters, Virginia (Ginny) J. Carreiria and her husband Jody of Dover and Jane C. Cress and her husband Chuck of Marietta. A son, Daniel G. Wallace and his wife Vicky of Denver, PA along with three grandchildren, Carli Moua (Chia), Jena Painter (Thaddeus) and Will Cress and six great grandchildren. He was one of ten children. He has three sisters, Patricia Rittenhouse of Red Lion, Nancy Nishwitz of Dallastown and Jean Hawkins of Red Lion and a brother, Jess Wallace of Michigan and numerous nieces and nephews. He was preceded in death by his three brothers, Donald, James and Joseph Wallace and two sisters, Sonia Sprenkle and Judy Barshinger. Viewing for Larry will be on Tuesday, September 19th from 6-7 pm at Burg Funeral Home, Inc., 134 W. Broadway, Red Lion. A Service of Honor and Praise for Larry will begin at 7 pm at the funeral home with Pastor Dan Derk, Chaplain of St. Anne's Retirement Community officiating. Burial will be at Craley Cemetery at the convenience of the family. Larry will be greatly missed by all who knew and loved him. His family was very important to him and he enjoyed spending time with them. He is remembered as having a great sense of humor, he loved music, nature, history, politics and poetry. But most of all he loved his baseball, especially the Cardinals and Penn State football. "Mudville hearts are happy now, for Casey hit the ball". We will miss you greatly, until we meet again. In memory of Larry, contributions may be offered to, St. Anne's Retirement Community, 3952 Columbia Ave., Columbia, PA 17312 or to Hospice and Community Care, 685 Good Drive. Lancaster, PA 17604.

Larry T. Wallace formerly of York, went from life to Life Eternal on Thursday, September 14th at 6:17 am at St. Anne's Retirement Community in Columbia at the age of 80. He was the son of the late Grant and Minnie (Zarfos) Wallace. He was... View Obituary & Service Information

The family of Larry T. Wallace created this Life Tributes page to make it easy to share your memories.

Send flowers to the Wallace family.