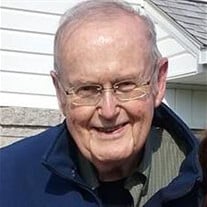 Lawrence M. (Larry) Troutman, entered into God’s care on Sunday, January 6, 2019, at 4:32 AM at Wellspan York Hospital at the age of 83. He was the loving husband of Dorothea (Sims) Troutman for 59 years. Larry was born in Shamokin, Northumberland County on May 4, 1935 and was the son of the late Lawrence C. and Eleanor (O’Brien) Troutman. He is a 1953 graduate of Coal Township High School and a 1955 graduate of Geisinger Memorial Hospital School of Radiological Technology. He earned his undergraduate degree from Bloomsburg University in 1960 and his master’s degree from Millersville University in 1972. He also holds a certificate in school psychology from Millersville. Larry worked at Geisinger Memorial Hospital in Danville as an x-ray technician in the mid-1950s. From 1960 to 1964, he was a public health sanitarian for the Commonwealth of Pennsylvania, Department of Health. Larry was employed by the Dallastown Area School District from 1964 to 1975. During his tenure, he taught at Leaders Heights Elementary, Dallastown Elementary, and Dallastown Middle School. He worked as a school psychologist for Lincoln Intermediate Unit #12 from 1975-1995, assigned to Spring Grove Area School District. He served his country in the United States Army (active and reserve duty) from 1959 to 1993 as a medical administrative officer; he retired as a colonel. His other affiliations include the Pennsylvania State Education Association, National Education Association, Red Lion Masonic Lodge #649 Free and Accepted Masons, Scottish Rite Harrisburg Consistory, National Sojourners Harrisburg Chapter #76, American Legion Post 605 in Dallastown, National Association of School Psychologists, Reserve Officers Association of the United States, The American Registry of Radiologic Technologists and The American Society of Radiologic Technologists. Larry was a member of St. Andrew’s Episcopal Church in York for 56 years and was a member of the Vestry. He enjoyed hunting, fishing, flying and RVing. Besides his wife, Dorothea, he leaves his two daughters, Deborah M. Sullivan and husband Tom of Red Lion and Ann T. Zalek and husband Steve of Ypsilanti, MI and a son, David M. Troutman and wife Louise of Cresco, PA. He was the grandfather to six grandchildren, Erin, Tommy, Mike, Kathryn, Eric and Evan. Larry has two brothers, Paul Troutman and wife Patricia of Hanover, Bill Troutman and wife Barbara of Coal Township, PA, a sister, Eleanor Bobber of Shamokin, brother-in-law Lyman "Bud" Sims and sister-in-law Doreen Sims, niece Gina Sims, and a great niece Kendra (Schwerd) Beck and great nephew David Schwerd all of Phoenix, AZ, and a nephew Robert Troutman and wife Paula Sue and great nieces Nicole, Emma, and Ashley of Mt. Holly Springs. He was preceded in death by nieces, Claire Ann (Bobber) Creencia and Tina (Sims) Schwerd. A viewing and reception will be on Saturday, January 12th, from 8:45 am to 10:00 am at St. Andrew’s Episcopal Church, 1502 Fourth Avenue, York, PA 17403. Masonic rites will be offered at 9:45 am just prior to the start of the celebration of life for Larry at 10:00 am, with Father Frederick G. Stevenson officiating, and Rev. Barbara J. Seras assisting. Burial will follow the service at Susquehanna Memorial Gardens with military rites offered by the York County Veterans Honor Guard. Burg Funeral Home, Inc., 134 W. Broadway, Red Lion is assisting the family. In lieu of flowers, contributions may be offered to: St. Andrew’s Episcopal Church, at the address listed above.

Lawrence M. (Larry) Troutman, entered into God&#8217;s care on Sunday, January 6, 2019, at 4:32 AM at Wellspan York Hospital at the age of 83. He was the loving husband of Dorothea (Sims) Troutman for 59 years. Larry was born in Shamokin, Northumberland... View Obituary & Service Information

The family of Lawrence M. Troutman created this Life Tributes page to make it easy to share your memories.

Send flowers to the Troutman family.