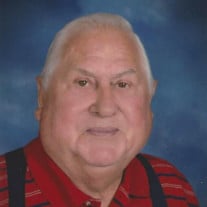 Leon R. “Jake” Geesey, Sr. of Dallastown and formerly of Winterstown, entered into God’s care, after a brief illness, on Wednesday, September 26, 2018, at 5 am at Manor Care Dallastown, with family at his side at the age of 81. He was the husband of the late Dorothy L. (Mann) Geesey, who entered into rest on September 1, 2001 and is the companion of his sweetie, Rhada, F. (Zellers) Gladfelter. He was born in North Hopewell Township, on October 17, 1936 and was the son of the late Harold Leo and Estie Viola (Flinchbaugh) Geesey. During high school, Jake worked on the family farm and then went into construction work as a cement finisher, employed with the former Waltemyers Construction in Red Lion and later with Kinsley Construction, retiring in 2001 after many years of service. He was a lifetime and very active member of Winterstown United Methodist Church in Felton where he sang in the Senior Choir and was a former Trustee. He was a longtime member of the former Southern York County CB Club, channel 2 with the call name of “Smoother”. Jake was a member of the PA Nut Growers Club, the Plaster and Cement Finishers Union #107, he played Horseshoes with the Winterstown League and was a pitcher with the Winterstown baseball team. He also enjoyed watching the Baltimore Orioles. Besides his companion, Rhada, Jake was a loving father to his three children, Bruce A. Geesey and his wife Robin Lynn of Dover, Leon R. Geesey, Jr. of Red Lion and Susan L. Cleaver and her husband James of East Berlin. He was the grandfather to, Bradley Wolf, Chadwick Wolf, Krystalyn Geesey, Jennessa Schumacher, Samuel Cleaver, Jacob Griffler and Ean Geesey, and great grandfather to, Branson Schumacher, Kendyl Schumacher, Dalton Wolf and Lucas Wolf. Jake also leaves nieces and nephews. He was preceded in death by his twin sister, Leona R. Haugh and a sister, Elaine V. McGinnis. There will be a viewing on Sunday, Sept. 30th , from 5-7 pm at Burg Funeral Home, Inc., 134 W. Broadway, Red Lion and on Monday, Oct. 1st from 9:30 to 10:30 am at Winterstown United Methodist Church, 12184 Winterstown Road, Felton. A Service of Honor and Praise for Jake will begin at 10:30 am at the church, with his pastor, Rev. David K. Shultz officiating. Burial will be in Winterstown UB Cemetery. Don’t grieve for me, for now I’m free. I’m following the path God laid for me. He saw me getting tired and a cure was not to be, so He wrapped His arms around me and whispered, “Come to me.” Don’t lengthen it now with undue grief, lift up your heart and share with me, God wanted me now, He set me free. Jake will be missed by all who knew and loved him and he now waits to greet us when we’re called home. In lieu of flowers, contributions may be offered to: Winterstown UM Church, 12184 Winterstown Road, Felton, PA 17322 or to Winterstown UB Cemetery, c/o Blane Markel, 5722 Pleasant View Road, Red Lion, PA 17356.

The family of Leon R. "Jake" Geesey Sr. created this Life Tributes page to make it easy to share your memories.

Send flowers to the Geesey family.