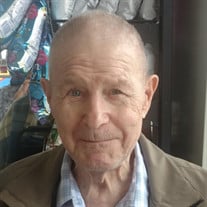 Lewan “Wayne” S. Jones, of York, went from life to Life Eternal on Saturday, September 14, 2019, at 11:18 AM at The Brunswick at Longstown, at the age of 86. He was the husband of the late Nancy Jane (Backel) Jones who entered into rest on June 9, 2011. Wayne was born in Yorkana, PA on January 21, 1933 and was the son of the late Robert William and Mattie O. (Fry) Jones. He was the second generation owner and operator of the former Yorkana Service Station for many years. He also worked at the former York Bank and Trust Company, from where he retired, as the mail room manager. He had a private pilot’s license, and an airstrip at his farm, where he enjoyed giving rides to friends (especially, first time experiences). He farmed for more than 55 years. Wayne loved horses. He trained them, travelled to horse shows to compete with them, and taught his children to ride. He was a member of the Appaloosa Horse Club. Wayne was a hardworking man. He put in long hours at the garage and on the farm. However, he always made it a priority to be home for family dinner, then he would return to work until late in the evening. He carved out family time by doing things like playing badminton, croquet, chinese checkers, jigsaw puzzles, ice skating, making homemade ice cream, and taking day trips. Wayne is survived four children: Steve E. Jones and his wife, Nancy, of Ogden, UT; Glenda C. Yaksich and her husband, Sam, of South Jordan, UT; Gail P. Wiemers and her husband, Thomas, of Vale, NC; and Dianne E. Kolb and her husband, Van, of York. He was the loving grandfather to seven grandchildren, twelve great grandchildren, one step grandchild, and four step great grandchildren. Wayne also leaves his three sisters: Pamela Bosley of Ten Sleep, WY; Vivian Paules of York; and Rebecca Fizer of York. He is also survived by numerous nieces and nephews. He was preceded in death by an infant son Michael Alex Jones. A viewing will be on Friday, September 20th, from 10-11 am at Burg Funeral Home, Inc., 134 W. Broadway, Red Lion. A Service to Honor and Praise Wayne will begin at 11 am at the funeral home. Father Barry E. Yingling will officiate. Burial will take place at Machpelah Cemetery immediately following the service. In lieu of flowers, the family requests those wishing to honor Wayne with a memorial donation may contribute to The Brunswick Resident Fund, 2830 Carol Road, York, PA 17402 or Hopewell Foundation, Caring Hospice Services, 101 Good Drive, 1st Floor, Lancaster, PA 17603. Please indicate "Lewan S. Jones Memorial." The family would like to extend our heartfelt appreciation to the entire staff of The Brunswick at Longstown and to Caring Hospice Services for the care and many kindnesses they extended to Wayne and the family. His quality of life was improved because of your dedication. A golden heart stopped beating, hardworking hands now rest. God broke our hearts to prove to us, HE ONLY TAKES THE BEST.

The family of Lewan "Wayne" S. Jones created this Life Tributes page to make it easy to share your memories.

Send flowers to the Jones family.